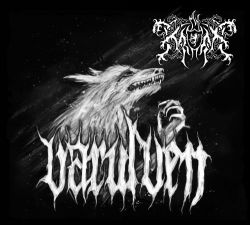 The Ukrainian Pagan\Folk\Black Metal formation Kroda reached a threshold or a level after which the band don't need representation, because the reader already know, whereof the speech will go. And therefore there is no need nor desire to tell full band biography. But, within this review certainly it is definitely worth to mentioning quite contemporary band history when it reaching the point of non-return after which Kroda has revived with new forces. But also could disappear …

Kroda is a case, when after loss of blood, nerves and commission of the ritual victim not come the death in oblivion, but come enlightenment and re-reborn. Initially created by two charismatic, but very different persons, the project reminded "push-pull" (fantasy creature with two torso which join together in one – one torso and head on the one hand, and second one on the other  - WH). Compromises created very interesting, unique, but at the same time a very inconsistent material which not always was easily and harmoniously perceived by listeners. It wasn't up to the end clear, where Kroda keep the path and what want. And frankly, it isn't up to the end clear today. But in day when one head came off from body and started creeping in direction, «where blow the wind», and the second head refused to die together with a body and continued to live, something in Kroda became more clear. But instead of completely rejecting everything that was earlier, Kroda acted much more wisely and more farsightedly. "Schwarzpfad" showed that the band has a recognizable musical basis about which the band knows and remembers and on which add any desirable structures, but remain the original "Kroda". Certainly, such change in outlook together with similar creative approach pushed a band to courageous decisions and experiments. And mini-compilation "Varulven" is  this sort of things, about which we will talk.

"Varulven" is a rather spontaneous release. It can be considered as the small compilation collected from the unpublished earlier remainders. Or as a single "Varulven" plus a bonus material of doubtful value. On account of the second meaning the name and the specialized cover done by atypical style for "modern" Metal of a scene by  testifies: everything, except a band logo, was painted by hand – image of lycanthrope\werewolf\wolfman, and the name of creation and a background. But nevertheless it`s compilation because the release contains compositions of the different periods, the purposes and contents. Therefore it is impossible to call it integral or self-sufficient release. But if it would be released as 7'EP with only the two first tracks … but we has distracted.

The first track named "Varulven", i think, the most beautiful, strong and memorable thing on compilation. And the newest, in comparison with the others. It was recorded at the same session with "Schwarzpfad" in 2011, Varulven is interpretation of the Scandinavian national song with same name, which was performed in a way, which pass between a material of "new Kroda" and old-kind creativity of Storm (which in due time successfully laid the foundation of a similar tendency). Kroda far not the first band, who performed this song by own way, but this version isn't possible to entangle with another interpretations. Slow, ritual drums of Summoner, shrill and notable, as if dew on the sun, lead guitar, creeping as snow cover rhythm guitar and a distinct bass section. Komus (drymba?) sound together with blizzard blowing and magnificent flute create magic. In the vocal plan, it is a male and female duet. In which Eisenslav assumes, on one hand, as a clean vocal, making one duet with female vocal and making a second duet with blizzard in a whisper, and on other hand, as a shrill growling wolf scream, representing actually nature of "The Wolfman" which was glorified in this song. The female vocal is the main leader, adding the powerful note and something is similar with Kari Rueslåtten and Emma Härdelin manner, only differing from last ones lesser quality, colour and experience. There is a serious shortcomings, but their little. First of all, it is not confident and expressive performing of guitar parties - more for lead set, which is balanced, but unfortunately, having a certain emptiness in mixing (though it concerns more to "Schwarzpfad" material and concerns this thing less) and noticeable Russian-Ukrainian accent. As the supporter in aspiration to saving the authenticity of original language together with the correct pronunciation, the last noticeably cuts hearing for me. But again, the fact that song was sung on native language and without heard mistakes, gain to close eyes for it. But result is very bewitching, atmospheric, magic and epic as a whole.

The second thing is some kind of "Varulven" too, by the name, and inner meaning. Only at this time it is Russian "Werewolf" because it is written and recorded by legendary Folk\Pagan\Black Metal band Temnozor, and like Kroda, it no needed in representation. The original song was and is a part of the album "Horizons", which was released in 2003. Cover version was recorded in the 2008 and intended for tribute to Temnozor, which so long prepared, what even became dead and isn`t seen, whenoriginal Temnozor became TWO. "Werwolf" was recorded in those days when Kroda already carried out "the Funeral of the Sun" and was going to re-recorded own heritage. And it is felt in record. The impetuous speed, the typical "saltwort" style, which consist of folk component, annoyingly synthetic drum, Eisenslav's loud vocal - in a word it`s "#typicalKroda". The cover is a very approached to the original, except for some microchanges in riffs and replacing of keyboard basis by acoustic guitar and plentiful bass guitar (keys didn't disappear absolutely, but it would be much better if it was so – because it was painfully ugly inserted into a track ). Despite a quite good realization, this composition doesn't allocate and doesn't shine as "Der Scharlachrote Tod" (Absurd cover) and isn't so cardinally re-processed, as "StormHeit" (Branikald cover).

The third thing is "Nemesis", or on a simple - "retribution". It is specified as the "traditional" German song, but, unfortunately, i never heard any original version   performed by any rural German ensemble. But I heard the version of the well-known forbidden German band L. which can be labeled as village folk only by retarded person.. But draw parallels with Kroda not pertinently absolutely. Yes, Kroda's version is ballad too. Yes, musical structure, including some arrangements, are very close with L. version. But Kroda`s version is more folkish (not least at the expense of vargan and sopilka), quiet and peaceful as glassy lake. Well, the Ukrainian version is instrumental. "Nemesis" sounds more wholly and qualitatively and could be close in spirit with material from  "Fünf Jahre Kulturkampf" (both rerecorded, and new).

About the fourth song we will talk briefly, because it precisely bonus among bonuses. The live version of track "Der Scharlachrote Tod" (Absurd Cover) which has been recorded on well-known "Kilkim Žaibu" festival in the 2012, when the "updated" Kroda prepared troops to bring Ragnarok in masses. Initially, this song was performed by Kroda only at live, but later was recorded in studio and released ("Fünf Jahre Kulturkampf") and became a permanent part of Kroda concert set. But that's not all. Somewhere in the middle of song the original motive proceed to melody of old French (Breton) drinking-song "Ev Chistr 'ta Laou! ", various versions of it may be found in many European countries. And if consider Eisenslav`s proclamation - "How Much is The Pest" - we understand that ideological inspirers of this version were none other than dancing Germans Scooter with their "How Much is The Fish". This track – completely amateurish and quality of record is very low, but satisfactory as a result. The original part of a cover differs from more straight line and the simplified arrangement, but thus without losing spirit and cheerfulness of an original cover.

Summing up the results, I will tell at once - "Varulven" won't be interesting to purchase to anybody, except for fans and Kroda's experts. And also it isn't right to rate this release, because it`s compilation. But the fact of the gathered and released songs which could be never released, is worth supporting. Hail Kroda! Hail Ragnarok!