Valdur has existed since 1999. Although the first full format album released in 2007 you are now an advanced and appreciable band. How do you estimate the way you’ve passed through since the very beginning till now after the release of the last album? How your views changed over the years? Are you satisfied with what you have achieved?

Valdur: We are not satisfied. But this is how we are. For example, we have been pigeon-holed as a blackmetal band. Valdur was never to be backed into one particular corner. There are so many influences, and we are NOT new to heavy metal. Some of the members from Valdur’s history grew up in the 80’s with Mercyful Fate and old Slayer and old Bathory and old Judas Priest, Blasphemy, etc. We really feel that currently, Valdur’s music is finally where it needs to be and finally sounds as it should. We learn our lessons the hard way, as opposed to most big-time BM metal musicians, who are just fooling everyone with their gimmicks.

According to the official information your genre transformed from Black/Death to Black Metal and then to Death Metal. Now it seems that you don’t distinguish between these three genres and just play the music you love. Are you agree or your point of view is extremely opposite?

I think we are best defined as metal. Now every fucking trendy, newcomer and their pet cat has to re-define every form of music to fit his or her sensitive tastes. Valdur has a lot of influences, but one thing that is very important to us is that we never get softer with our music. And having some atmosphere is always important. Maybe at times in the past, our music was too much of one kind of music, but we were still learning how to become who we are now.

Let’s discuss your last album “Pathetic Scum”. I appreciate it for an outstanding material, high-quality sound and a good artwork. Give your assessment of the release. Are you completely contented with it or you would like to change something? Does your fans’ opinion matter for you? 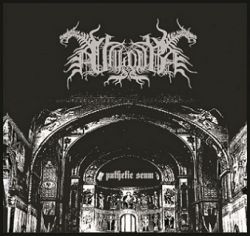 Thank you. We do everything ourselves, including the artwork and layouts. Some people like it and some don’t. If you don’t like it, then fuck off and go somewhere else. WE like it. We wouldn’t change a thing and we will continue to become harsher, and more ‘unfriendly’ with our music and our approach. Valdur HATES all the easy-listening trends in our brain-washed country. And we are so extremely against the music industry, that we can’t even imagine having fans. This extreme form of metal was always meant to offend people, but now it’s mostly just regurgitated Happy Meal’s for thin-skinned, fragile types.

Well, before the recording began, the drummer’s (Matthew, i.e. Sxuperion) closest friend had recently died in a climbing accident (we live on the side of a 14.000ft. mountain range). Matthew was constantly binge drinking and going into violent fits of rage to try to deal with this. And since he also produced this album with the band, things were constantly chaotic… but everyone else kept their cool. The entire album was recorded and produced at the bands’ Bloody Mountain bunker and no one else helped us at any point in time. It was up to us alone to do what was right.

There is plenty of religion involved, but it is mostly aimed at ALL humans. People litter this planet with ignorance and ego. It is also aimed at the current state of the metal scene. We have always hated scenes. Scenes are for children in middle-school. And now here we are with our current North American metal ‘scenes’ that are so lame. Valdur does not want you to enjoy our music if you have no concept of INTEGRITY…and this, really, is what all the lyrics are about. As far as religion goes, it’s all the same shit… stolen ideas for those who cannot think for themselves. IDIOTS!

If I am not mistaken the artwork depicts just what I’ve mentioned in my previous question. Do you design the artworks by yourselves? If not, do you work with a particular person or change the artist for each artwork?

We have had some help with the artwork on past releases, but with Pathetic Scum, everything was done by the band. Who knows what we will do with future releases? But, Valdur handles so much of its own production and it’s own layouts…we have learned the hard way that outside influence usually just makes things worse.

I would like to learn something about your personal views. What is your attitude towards Satanism and Paganism? Do you distinguish between them or treat them as one? What else could you say about your worldview? Could you comment on such notions as misanthropy, nihilism, abstractness? 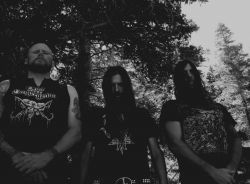 Religion is the exact same thing as greed or politics, etc. It is child’s play. We have all met so many very serious ‘orthodox’ metaller’s from around the world who admit that it is a joke and a selling point (another gimmick!), and if they tell you differently, then they are probably lying. But hey, Valdur isn’t here to sell records, as we could give a fuck! Fuck you, greedy music industry! We live in the wilderness of the Sierra-Nevada mountain range, so we are surrounded by high deserts, forests and mountains (hard to believe in California, huh, dipshits? …Not you Winter, Hah!) so we are connected to the real universe, instead of the man-made universe of weakness and control. Kneeling down is weakness. Standing is strength. We are complete misanthropes, humans are pathetic scum.

What is your source of inspiration? Is it real objects or events from the outer world, or your inspiration lies within your personalities?

The fact that our sacred form of music is so poisoned by trends. Poisoned with so many bands looking for headline status….slaves! Otherwise, our internal inspirations are private to us.

What could you say about your projects Sxuperion and Weverin? I heard Sxuperion’s split with Verräter, it is excellent. Are these bands connected with Valdur or they are conceptually unlike? You all cooperate with Bloody Mountain Prod. In what way it is supportive for you and what kind of policy it applies?

Our drummer, Matthew, does his solo stuff called Sxuperion when Valdur may be a little less productive at times. Matthew is a busy individual indeed. He spends a lot of time in the wilderness away from people, and travels a lot, and does his own solo projects, and produces Valdur, and helps out other bands when they need a drummer, like Weverin or Endless Blizzard or Ritual Combat or others. He is an extreme misanthrope. He just finished the next Sxuperion full length, called Cosmic Void. He hates social media, so he’s hard to find. There isn’t any Sxuperion shitbook page that is ‘official’ any longer (so funny how ‘brutal’ musicians pose for attention on the internet like insecure, little girls).

We have a love/hate relationship with playing live. Our lives don’t depend on getting on stage and needing applause from others. And we kind of laugh at bands that define going on stage as a ‘ritual’… stupids! Sure, we have played live so many times and it is very important to us that we play to our fullest potential. But, it’s NOT a ritual…and those who think it is a ritual, are liars and fakes. You want a ritual?...then look inside yourself. Seek out the corners of your mind that you are so afraid of, and find out who you really are…instead of going on stage and depending on other people to applaud you. But playing live when necessary is important to us. We all work for a living and so we don’t suckle at the over-inflated tit called the industry…although it would be great to be on Peaceville… they have Autopsy and DarkThrone.

The answer is that we don’t know. This is because we have really closed our doors to the outside world. But to avoid sounding so vain, if you have some recommendations, we are all ears!

Our plans are to continue to make the music that we want, and to move further and further away from the pathetic scum that are SO dependant upon what others think of them and the applause that they so require.

Thanks Winter, for the well thought out questions. Much respect.