WinterHeim: Greeting you as an agent of Moonlight Dominion. It had past much time since there were some news from you. How are yours affairs? In other words, is Vorkuta still alive or not?

Hails! Well I also don’t know at the moment what is the status of the band. Better if we call it on hold. Basically the other members have left the band around 2008. What means I’m the only member in the band at the moment. I really would like to follow the band but I’m quite busy with my other bands (Drünken Bastards and Dög) and with my personal activities as well.

Now it's 2010 year, and your last release was a split with Marblebog. Will there be a record and release of the new material? Doesn't nowadays lull connected with your other band Drunken Bastards?

Yeah our last release the split was with Marblebog. It’s really a great release, and in my mind one of the best Vorkuta recordings ever. The CD version of the split just released 2 months ago, and still available from me as well as the tape version. Unfortunately the vinyl version is totally sold out. Well as I mentioned the band is on hold right now. But yeah I plan to record something new under the name of Vorkuta but don’t ask when haha.

By the way, if we're talking now about Drunken Bastards, would you like to tell us more about this band? As I understood, DB is oriented more closer to oldschool\Drinking\Thrash`till Death terms, am I right?

Hahaha you are right. Drünken Bastards are about drinking thrash ‘till fucking death and musically more old-school than Vorkuta. Although always was an old-school vibe in Vorkuta’s music as well, enough to think on our split 7”EP/MC with Abigail.

Drünken Bastards are an old style metal/punk band with d-beat/punk/speed/thrash/black metal and rock n’ roll influences. Up to now we released a full length album, called “Posercrusher” and 3 different split CDs (with Japanese Barbatos, Mexican Rötten and a 5-way split, called Fantomania). All of these materials have been released under the banner of Hungarian old-school metal label Metal Ör Die Records. But now we have left the label and signed to US base label Hell’s Headbangers Records for our second album “Horns of the Wasted”. So the new album will be released on HHR in July, keep your eyes open dudes!

The most biggest part of Vorkuta's discography consists from splits. Tell us, please, whether you just like this form or whether it is more acceptable for the releases of your materials or it is just more suitable for labels which put you out? Which of bands with whom you have done splits, in your opinion, looks more interesting?

Yeah we released some splits over the years. I think to release split materials are great to join our forces with other unholy formations and to demonstrate the power of the real underground. Our first split was an extremely limited tape with our fellow countryman Verdeleth in 2004. The next one was also a tape release with French band Osirion in 2005. In 2006 we released two split materials with 2 different Hungarian bands. First of them was a split CD-R with Heldentod and the second one was a tape with Hell. The Heldentod split later re-relased on tape by Aussie label Ruin Productions. In 2007 we released our first vinyl what was a split 7”EP with Japanese Abigail on German Necromancer Records. It also is a great release, musically and it’s design as well. The cover was painted by my friend Raynard ‘Rayzor’ Stevens who is an American tattoo artist and worked on the Drünken Bastards artworks as well. The next in the line was also a split vinyl EP with phillippino Kratornas on Paragon Records in 2008, then a split MC with Aussie Woods Of Desolation in the same year and at least our last release, the split with Marblebog. The Marblebog split released on 7” EP and MC in 2008, then later on CD in 2010. 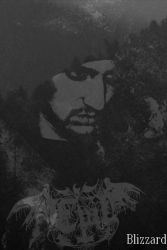 WinterHeim: As I understand, Vorkuta - it is you, Inmar and Hellspike. Drummers were sessional or just didn't hold off for a long time. But now Khrul - a person rather legendary - is playing with you. Is Khrul a constant member of Vorkuta or just a session drummer?

Well as I mentioned in the first question, recently Vorkuta is just me. But yeah in the past we were a three piece band. I formed the band around 2001-2002 together with Hellspike. Inmar joined to us in 2003 if I remember correctly. But the guys left the band in 2008. So I remained the only former member in the band. Well we never had real drummers in the band, we always worked with session musicians. Khrul also was a session member only.

The material from you split Heldentod (2006) saturated with the atmosphere of Lovecraft 's horror and darkness. I'd like to confess that Lovecraft is one of my favorite writers and it was doubly pleasure for me to hear on the splits of my lovely band lyrics which soaked in the spirit of his work. Tell us, Blizzard, on your point of view, doesn't this great creator lost topicality nowadays? And what is your favorite work of Lovecraft?

Thanks for your words Man! Lovecraft and his spirit are eternal! It’s undisputable! He is one of my favorite writers as well. To be honest he has too much writings to name a few but I always loved his works about the Elders, Deep Ones and Cthulhu myth. When we recorded the Lovecraft session for the split material, we really felt the darkness around us. It was really a great experience. I’d like to work up his legacy in the future as well but instead of Vorkuta, this time with our cryptic death metal band Dög.

Let's talk about the song "Vorkuta" from your full-length album "Into the Chasms of Lunacy". "Vorkuta" - it is a coldness, loneliness of tundra, aurora borealis, like a stone castles there are prisons, mines, factories. Have you ever been in Vorkuta? If you're not, would you like to visit it?

The track Vorkuta was inspired by a poem of a survivor of GULAG. One of my fave Vorkuta tracks. The track is really a deep, honest and distant journey for me. Unfortunately I’ve never been in Russia but one day I’d like to visit your county especially the town Vorkuta. Would be great to record a material or to play a live show there. Who knows what bring the future for us, we will see.

Let's talk about other members of the project. Is Dog active now? And what is the band - Pavillion Rouge?

I’ve never taken a part in Pavillion Rouge. It’s a French band and runs by Osirion’s bass player Maldoror. So I really don’t understand why PR is listed behind my name on metal-archives.com. Ok, Maldoror has been here in Hungary for a few years in the past and we did some sessions together but nothing serious. Maybe that’s the answer.

Dög is still active. We are working on our debut album at the moment. As I mentioned the new album will be a real cryptic and satanic death metal monster in the vein of Autopsy, Aspyhx and Hellhammer with Lovecraftian lyrics. If everything goes well we can finish the recording procedure at the end of this year and Autopsy Kitchen is ready to release the album. So wait our Lovecraft inspired horror in the form of the new Dög album.

How do understand the meaning of the term "Satanism"? Is there some place of satanism in the works of Vorkuta?

For me the real metal is always satanic as metal is the devil’s fucking music. But I’m not a Satanist. I believe in something transcendental but I can’t name what is that exactly. All in all, we had occult themes, dark philosophical thoughts or some rocking hellfueled parts in Vorkuta, but nothing about Satanism.

Next question I just was able not to ask. In your opinion, have the term of NSBM a right of existing? Doesn't it, in fact, contrary to itself? And do you support bands of such style?

Well, I don’t support no one except my friends. That’s the truth. I do not care about NSBM or any other BM styles. But I don’t have any problem if someone uses his political views in his music, so I think there are rights of existence for NSBM bands as well. But on the other hand I can’t agree with the “black metal for white people” slogan. Enough to think such a cult bands like Blasphemy, Sarcofago or Mystifier. Those bands have the real rights of existence on the metal scene. 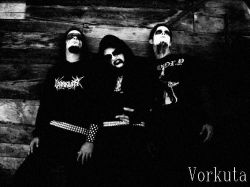 Our traditional question: in your opinion, how would the BM scene look like nowadays if there wasn't the murder of Euronymous and mass-media wouldn't have trumped about it on the whole world?

I don’t like your traditional question guys haha. Ok, Euronymous was a great musician with incredible talent towards extreme metal. And I really respect him for his works, but that’s all. He was just a man like you or me. No more, no less. The fact that black metal became a conventional subculture really doesn’t depend on him or on his death. Sooner or later the same happens with all of the subcultures or underground movements. Especially nowadays in the time of the information society.

How often do you tour? Where have you perfomed recently? Would you like to play in Russia if one of the russian organizers offered it to you?

Well we never played live with Vorkuta. We just did some rehearsal session in the past. But Drünken Bastards are a live band. We played many shows with bands like Nunslaughter, Municipal Waste, Barbatos, Morbosidad, Sathanas, Mörbid Carnage etc.

Oh man, to play in Russia one day would be a dream. Especially with Vorkuta in Vorkuta hehe! But it’s really just a dream with Vorkuta now. But with Drünken Bastards maybe we can visit you in the near future. Do you know any cool organizers there hehe?

The question about musical tastes. Could you name the fiver of your most favorite albums for all the times? In what format do you most prefer to listen to music?

My fave format is the vinyl but I collect tapes and CDs as well. It’s really a hard question. Ok, here is a top 11 list with some of my faves (but you guys know the list is endless):

Which young promising bands would you like to distinguish on the nowaday's Hungarian Black Metal scene?

Thank you for the interview. Any Final Words?

Thanks guys, it really was a cool intie. For those who are interested in my bands check out our myspace sites for more infos:

Remember: Only death is real!