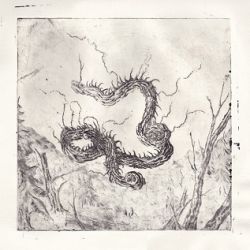 Signal Rex is proud to present the highly anticipated debut album of Naðra, Allir vegir til glötunar, set for international release on January 22nd, 2016. Hailing from the extremely hot Icelandic black metal scene, Naðra's moniker translates to "serpent" in Old Icelandic, and their sound approximates the eternally coiling Ouroboros of ancient legend, forever devouring its tail while circling the earth's very depths. Likewise, Allir vegir til glötunartranslates to "All paths to oblivion," and a more accurate summation of its sonic splendors one will not find. Blasting out from gate and surging forever forward, down epic paths, passionate in their possession, Naðra take the listener to untold ends of that earth and one's "inner earth" - five songs, five keys, five resonances.

With members hailing from such bands as Carpe Noctem, Abacination, Dysthymia, O, Úrhrak, and Mannveira - as well as new drummer Helgi from the celebrated Misþyrming, among others - all of Naðra are prolific players in the Icelandic underground, and that combined experience shines through in every aspect of Allir vegir til glötunar. Its dates of recording are symbolic, too, with the album started on November 4th, 2014 and finished on the 21st of May, 2015.

Says vocalist/guitarist Tómas Isdal, "The music on the album speaks for itself. The lyrics, however, will not be understood by those who do not speak Icelandic, and due to their personal nature will never be published. To stay true to oneself in the face of futility is the big idea here. You must create your own meaning, lest there is none."