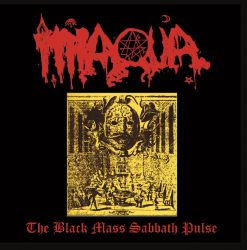 Following on from last year's cult Initiation to Obscure Mysteries demo - so widely celebrated, in fact, that Iron Bonehead Productions reissued it on 12" vinyl - Greece's Ithaqua present a brand-new two-song 7" EP, The Black Mass Sabbath Pulse. Set to be released on Walpurgis Night (April 30th) by Iron Bonehead, The Black Mass Sabbath Pulse presents an even stronger and more confident vision from this unholy duo. In many ways, the rough-around-the-edges Initiation to Obscure Mysteries could've been a lost demo from the Greek black metal scene circa 1992; by comparison, The Black Mass Sabbath Pulse is the bold and bright step made by legends like Rotting Christ and Varathron when they recorded their respective debut albums. The same rudiments remain - pulsing, arcane mysticism and epic heavy metal might, now daubed more heavily in mysterious synths - but here, Ithaqua display a deeply seated understanding of what made early Greek black metal so majestic and are now able to put their own distinct stamp on such. Of the two songs, the A-side title track is indeed a pulse of Black Mass, windswept and infinite, thoroughly hypnotizing in its hammering surge; meanwhile, on the flipside is "Walpurgis, The Flight of Spectral Witches," which is a winding travelogue across magickal autumnal nights, lurking about before taking climactic flight. The growth between Ithaqua's demo and their first EP is not inconsiderable: the potently occult atmosphere and simple-yet-unforgettable riffery remain, but the band are truly now on the path to greatness with The Black Mass Sabbath Pulse.