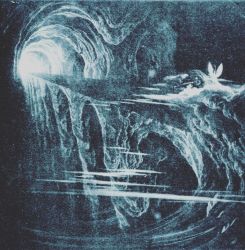 Iron Bonehead Productions is proud to present the self-titled debut MLP of Scotland's Ifrinn, set for international release on March 25th. Aptly branding its message and message "Caledonian Black Magick," the Ifrinn constellation was established in 2014 to evoke the oscillations of the nightside. Weaving a black metal medium intertwined with praxis and transmigration of the other side, Ifrinn seek to infuse their music with quintessential esoteric principles whilst maintaining a primitive black metal-influenced sound. There are no names nor identities within the constellation: Ifrinn seek a firm resonance with their vibrations that the burden of identity would effectively undermine. Composed over much deliberation, the silence has finally been broken with Ifrinn, comprising five verses in celebration of the nightside and her majesties. That resonance spirals ever forward and onward, infinitely and with infinite possibility, as the vessel of Ifrinn guides the listener across the dread landscape of this mini-album. It is sound in which to drown, beckoning always, on the brink between being and un-being, outside and other-side; it is the beginning of Ifrinn, which will have no end.