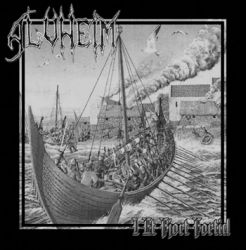 We are loving to criticize our Russian BM scene - most often it`s fairly. «Sterile» sound, poor performance and total disrespect to this genre. But most insulting thing in this case – it is inability and unwillingness of such bands to inlay yourself in creativity. In other words, they don`t have desire to make unique and unbanal music. And they don`t have ability to feel, when they play and compose something. After my familiarity with music of native BM band Alvheim, I must say that their album « I Et Fjort Fortid» - is unique and single creation, which has own story and which not afraid to expand this story without pretence and hackneyed structures. It is not super beautiful or awesome work and it has some mistakes, but it is honest creation – without pathos or overestimate.  And while we anticipate new material from this band, we may recall «I Et Fjort Fortid».

Alvheim is a band, which soak in Norse spirit, but born in south Russia, that may be paradoxically for you. Sochi is warm and sunny resort city and, I guess, Norse drakkar didn`t moors to this shore ever. Huge foreign public has known about this city because of winter Olympic games 2014. But however, we won't go into details of preparation of this event (topics of import of the trucks filled with snow and Asian guest workers), and we will talk about Alvheim, and don`t step away from this theme.

«I Et Fjort Fortid» (eng. – «In Far Past») is a EP, which was recorded in 2008 by one and only member of Alvheim at that time – Alvar. By then, Alvheim already existed about 3 years and already collected material for the first album, but had a problem with line-up. And after all, despite of circumstances, a mini-album was composed and uploaded in the free access because main idea was only show the album and band didn't dream about releasing something in physical format at that time. The album didn't remain unnoticed and in the 2009th year, quitted thanks to Gardarika Musikk, was released on CD, that marked Alvheim on map of Russian undeground BM scene.

The Album starts with epic middle-tempo composition "Stormens Sang" that translated as "The Storm Song". Beginning with a horn and an introductory acoustic guitar, in a surrounding of the rocks washed by waves of the cold sea, the composition opens "I Et Fjort Fortid" traveling. Tranquil, sad idyll is periodically take turns by impacts of the terrible waves, growing wind change into angry squall. And storm is arriving, in sparks of the lightnings, rising and roaring, pouring unshakable stone by ice water. At the end, storm is fading, smoothly abating in the distance of dawn. "Til Valhallen" - "To Valhalla" – raid of the horde in pursuit of glory and death. Steel dance, staining in blood and burning out lifes. Fast, violent battle. Feast of Vultures, way of worthy in Valhalla, and rabble – to Hel. "Det Onde Riket", "That Kingdom of the evil" - destiny feeble and unworthy to suffer in Helheim – to reap an essence of what were during lifetime. Distortion and the perversion, covered as a new skin and unenviable destiny. Nobody will leave from Weavers of destinies (Norns). "I Et Fjort Fortid" - a flashback, without wasting words – directing a vision in the cold sky shrouded in a haze of constellations. And suddenly awoke Among rocks and the same quiet ice flushes. "Graven Takeheimens Saler" – is a immortal song of Darkthrone from "Transylvanian Hunger" and when it end,   the traveling is ends as well ….

Fundamentals of music, riffs structure and perform elements lead to three pillars of Norwegian of Black Metal – Burzum, Darkthrone and Enslaved. Alvheim didn't try to copy someone, but influence of fathers more than hugely and with it, alas, you won't argue. Each composition has the history and connected with together only in general theme. The same can be told about music – tempo of each song varies from middle to the aggressively fast. The melodics is rather rough and rectilinear – "I Et Fjort Fortid"  doesn`t have difficult and complex structures that doesn't hinder to compositions be rather integral and don`t  disappear from memory after listening. The lyrical side – is individual merit of the author. Texts are written in the Norwegian language, which level of speaking is comparable with level of similar bands from Norway, with a stipulation "the native language – is better". The lyric component doesn`t  tell that especially difficult – everything is clear and available and implications with difficult sense doesn't meet.

Guitar sound is rather fresh and atmospheric. Especially acoustics on which are built the most lyrical and thoughtful moments. But in case of all the positive, sounding gives synthetics that most of all blows from a leading guitar, but also together with a rhythm guitar in the blastbeats turns sounding into porridge. Bass guitar - also valuable instrument which has been successfully interwoven into music. Adds the structure, supporting and entering a powerful melodics, without facing and without hindering other music parts. Drums – a huge minus of this album. And not only in frankly cheap samples, but also in high lack of knowledge and experience in recording of author at the time. More it affected straight lines blastbeats and bass drums passes, in less level – all remaining. Isn`t such rare problem for BM  scene, but comparing with worthy record of remaining tools looks very poorly and spoils impression about creation. Vocal – is the high "ragged" grim sometimes change on whisper in the quiet moments, rather perceptible and at the same time stridently. Unfortunately, quite often deafening music by itself. Sounding of  album if not to take spoiling elements, reminds the Darkthrone in "shaprness" and early Enslaved in " Nordic severe of a bare stone" atmosphere, but also gives in places for medieval melodics and "hermit`s cosiness" of  early full-leighs of the Austrian legend Abigor. The cover on «Graven Takeheimens Saler» was ideally inscribed in the general sounding of album, in spite of the fact that sound of original song absolutely another. For the rest – worthy replay, despite the general technical flaws of album about which it is rather written above.

The album design made in quite common and strict style. Runes, Mjolnir, photos of the rocky fjords opening the road to the sea, retouched in dark ton. The four-page booklet is filled with the printed lyrics and runic symbols. Strictly and without excess attributes.

"I Et Fjort Fortid" - a successful debut, but isn`t good example for equaling. But perhaps if you have a desire to make something real and living, not like scum from social networks, it is better to equal on Alvheim. This creation – is a part of underground, with all respect, and also certainly this is integral album. And apparently unique, because the course carries a band further, to a new material, which will be (if clatters don`t lie) differ from "I Et Fjort Fortid" in all aspects. But will be the new work better? It will show the time.