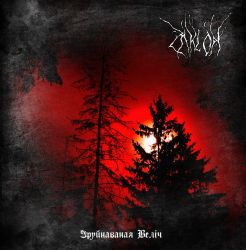 Journalists, experts and connoisseurs of the classical BM era of early mid-90s are ready to spend hours, months and years to extol masterpiece albums of Burzum, Darkthrone, Mayhem, and other luminaries of Black Metal. They love to picture in detail the story of the evolution of a particular band from album to album, love to explore the each single creation with magnifying glass and tweezers, looking for the smallest details of some hitherto unknowns or not yet discovered concept elements or historical facts. But  they simply do not recognize all that was born from the «spores» of these classic black metal bands, which were dispelled around the world once do not get accustomed to it, do not see this, considering it only as a second-class pathetic slag clones and useless garbage. For the most part they are right, but the error of this vision lies in the fact that most of those who strive for a sincere expression of itself through a combination of tradition and their own worldview are lost among the gray mass. And their creative path can also be studied with pleasure, no less than once it was with future legends style. They try to find the audience, but the audience should try to look for them, and do not deny their existence.

So say this about Belarusian project Zaklon means to exaggerate partly, but only partly. Since the time of release of the first demo 11 years have passed, and since the foundation - even more. And for all the time that has elapsed so quickly through his fingers, Zaklon created quite an extensive discography, exploring which you can clearly trace the path of musical and ideological evolution of the project. We set aside all other Temnarod`s (the founder of Zaklon) projects, and turn directly to the history of its main brainchild. Relatively speaking, this story is divided into two parts. The first - the earliest, is more oriented towards the classical Black Metal, evil and raw (not least because there were a small budget records). And the second - nowadays style - is the one where the creative thought of the author is no longer fully depending on the ossified old style frames, adjusting the music to the own conceptual base. " Зруйнаваная веліч " ("Ruined Greatness") is the album, originally released in the 2006. It is the crowning achievement of an earlier era of Zaklon, which creates an invisible border, that separates these two eras. Due to the fact that this album was recently re-released, we will consider it in more detail and will tell you about all aspects of this album.

The album opens with the song " З глыбіні вякоў праклён " ("From the depth of centuries curse"). After a short introduction on a flute, there immediately begins fierce and straight Black Metal, like a hurricane, gloomy and depressing notes, with a focus on harsh, primitive and raw riffs reminiscent of "Transylvanian" Darkthrone and creations of Belarusian band named Pagan. On the latest band Zaklon is focused largely, but making the slope more in the "Slavic" way in structural aspect. And this is not the typical "joyful  pagan" with which this word is associated routinely, it is authentic folk motifs that dilute monotonousness and overloaded stuff, giving to it variety. Next song "Песнь Дажджу " ("Song of the Rain") once again highlights these already mentioned Slavic tunes, but this song is more meditative and thoughtful composition in itself. Most of the albums structures are based on often, almost cyclical repetition of the main riffs and inextricably linked to the narrative of the album. Temnarod`s vocal is hoarse, long-drawn and blasting by its overflowing emotions, and this is especially felt in the capital song " Зруйнаваная веліч " ("Ruined Greatness "). The slow and mournful, the composition sounds like the most early, not trendy DSBM with minimal share of Zaklon `s songwriting style. And though the vocals at that time conceded to grandes from Australia, America and Sweden, it was already beginning to acquire an authentic and recognizable style that gave the music an extra bit of racy. Truth to tell, on the previous records there were attempts to use a clean voice, which bore a large share of folklore and traditions, but final result was controversial in terms of sound. On this album there are no endeavours to use clean vocals. Combinations of rhythm and leading guitar parts, as well as "ritual" drum machine patterns are especially evident in " Калі ноч пахавае надзею " ("When the Night buries hope"), made in a similar vein with " Песнь Дажджу " in terms of thoughtful sadness. It is literally hypnotizing, allowing to fall into the "sunset world" of ruined greatness. The next thing literally pulls us out of sleep. Song " Пад чорным сонцам " ("Under the Black Sun") brings us back to structures of the first tracks of the album, but it gives a standard post-Soviet BM melodics occurring in the CIS mainly in bands of the penultimate freshness. And the last thing " Пахаванне Хрыста " ("Burial of Christ") finally brings us back to the beginning and is very reminiscent of " З глыбіні вякоў праклён." The one can clearly hear the motifs of early Pagan, which is not bad. To open and close the album with tracks that are similar in many aspects to each other is logical from conceptual point of view, but something that sounded at the beginning with fury and passion, at the end sounds more sluggishly and lacks emotions.

Technical and performing sides of the album look much better than it was on previous releases, squeezing the maximum out of equipment available to author. However, "Зруйнаваная веліч " was unable to avoid some ugly elements, and  of course, it is affected the quality of music in general. What strikes the ear right away is prehistoric computer drums, their low-quality sound and the absolute lack of any work with it. "Everybody did like that in 2005", "no opportunity to make differently " - this excuse does not work. Now is 2015, ahem, such attitude can still be found in creativity of most projects of "home misanthropes". Disgustingly sounding drums are most noticeable in the fast compositions where there a lot of drum lines and their intensity is high. In slow moments their intensity is reduced to a minimum, and their perception is smoothed, though unpleasantness, of course, remains. But with the sound of guitars, author worked much denser, continuing to improve the sound, which was on previous demo «...Дзе вецер нараджае гімны зімы ", and investing in this album more sorrowful and lingering atmosphere. The role of the bass parties are stripped down and simple, and in terms of performance bass parties do not cause complaints, but it is too high in the mix, that results in complication in perception of the individual compositions.

To wait lyrical revelations from the project, which has just started to show its identity, is quite recklessly. All texts are reduced to the description by the author of his night walks through natural landscapes, mixed with his own experiences and memories\thoughts. Usually texts of such sort are just foundation for vocal lines and don’t reveal themselves for a simple listener. But a vague semblance in lyrics is still here. Some songs rather tell, talk about something specific, while others simply breathe a word or two at a time in a hysterical fit. Many times recurring "Black," a lot of "forest", a lot of "Night" shows the absolute simplicity of writing and description of what is happening. In this regard, the lyrics of "Funeral of Christ" completely fall out of more or less overall theme of the album. Pagan themes do not mean "anti-Christian", although certainly in nature and in many ways it is exactly so. Another question is that the theme of the album, according to the main content of the lyrics, is based more on personal perception through the prism of tradition, and anti-Christian themes there somehow do not fit in with the main narrative line, and it just does not feel sincere. It was not possible for me to see the booklet of original tape version, and the art which is associated with this record, does not cause any specific emotions. This edition has its own art, representing a night landscape with trees and moon, combined in photoshop with predominance of reddish color which brings to picture mysterious ritual nuances, also enclosed with the edges of obscure haze of fog. And throwing away all conventions, the one should agree that cover perfectly reflects the contents of  " Зруйнаваная веліч," and it makes you clearly understand that here you’ve got post-Soviet Slavic black metal with bedroom sound quality and cheap drums, hehe. Booklet itself does not gladden the listener with the variety of design ideas and useful information. But the main key elements such as lyrics, photos and copyrights are present. So it is perfect for getting covered with the dust on the shelf.

All "actions" and significant gains of Zaklon began in a couple of years after the original release of this album. And most of today's listeners will not waste time and attention for such sorts of outdated and crooked demos, when there is something more serious and meaningful. However this Zaklon`s demo  was the transition point, after which, as they say, Zaklon «completely found himself". Early demos show the emergence of the emotional, melancholic, depressive and ethnic Slav elements that later overshadowed everything else, giving to the project its true face. And whatever shortcomings these demos have, it is impossible to deny the fact, that they are significant steps in the evolution of Zaklon and worthy of more close attention.

"Greatness is ruined, but not forgotten."