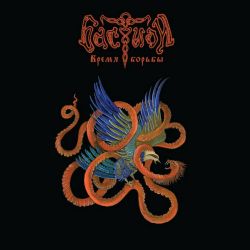 «Бастион (Bastion) – it`s a stronghold. Indestructible strengthening, where is the only power is unity. Back to back, without fear of encountering with legions of enemies. Harmonious mechanism, which aims is to stand up to the end!». This or a similar sense was put in name of Pagan Metal band from Krasnoznamensk, Moscow region - Бастион. In last year they released new album - " Время борьбы" («The time to struggle»), which marked a new era for the band. The first 10 years of formation already brought benefits and Bastion is ready to withstand as much again. Well, we will try to find out whether successfully been made a new and crucial step ...

The band was founded in 2002. And, despite the fact that the only member remaining from the original line-up is a drummer Ivan, all participants are integral and equally participate in the work on the material. Dmitry (Wind instruments, vocals), Yurij (bass, vocals), Constantine (guitar, vocals), Alexej (guitar) and Alexander (keys). Together they are the Bastion. Between 2003 and 2007, a band recorded a few demos, and material from this demos became the basis for the first full-length album called "Dawn of Svarog", which was released by Der Schwarze Tod rec.. The album embodies the equally a lot of positive and negative features of nowaday Russian Pagan Metal scene, trying to simultaneously represent tradition, musical muddle and punchy vector of own evolution. However, we will compare «The time to struggle» and "Dawn of Svarog" many times because the current development of the musical component Bastion not completely eliminated many of the elements that were present on the first album.

The basic musical structures are, on the one hand, some kind of War Pagan Metal with sufficiently dense guitar sound and direct blast beats, and on the other hand, in some compositions prevails share of Pagan Black Metal with sounding tremolo and more simple, but impetuous structures. Among other things, you can hear the Epic Metal elements, a lot of folk elements, Viking Metal elements ("Arkona 1168"), and even harsh and cruel Death Metal elements. The vocals range from clean vocal and rough hysterical roar, to heart-rending, but constrained scream. Also present chorals. All together it does not form porridge, and vice versa - allows memorizing the nature, characteristics and nuances of each song. For example, this music is fervently, but if in the composition "the time to struggle" it is quite amusing, the "Fighting" is inspirit. And examples where seemingly similar structures are going hand in hand, quite a lot, but their presentation is always different and each song many times changing and surprising. And it certainly has its drawback, which is expressed at a high enough pressure on the listener and an opportunity to miss and do not remember some pieces of compositions. Among folk instruments there are many wind instruments and accordion. They all were on the "Dawn of Svarog", but here their density and volume are adequate, and they do not attract too much attention, and just beautiful weaving and complementing the metal part. Separately i want to mark the last song of the album called "in the songs of forefathers." Technically, it is divided into two parts, the first of which is structurally very strong and hysterical from an emotional point of view, since combines not only the above-described elements of the Bastion, but also refers to the Heathen Metal, especially from Scotland. Submission of music is simply gorgeous, and the culmination into the second part of the composition - instrumentally\ambient outro, is a stimulus to thinking about the whole album.

As for the quality of the recording, it is very clear and volume, which is comparable to other well-known Pagan Metal bands from Russia. Typically, such a move is not peculiar for bands with hints of radical ideological position which are not commercial products and accordingly, do not want sound like it. Although Bastion is not perceived as the choice with two variants, and is embodied as one of the good examples of European and ideological bands that are not locked in the prison of prejudices and opinions of others and can combine good sound, strong idea and powerful material. Record and mix are adequately discovering all of the elements of music and emphasize narrative of compositions. The sound of folk instruments do not overlap, and not inferior to metal parts than the debut can`t boast.  If we again compare the "Dawn of Svarog" and "the Time to struggle", the largest and most tangible difference will be felt in the quality and level of recording. Debut album sounds cheaper, because of what, metal part is sounding a little different with folk elements part. All elements of "the Time of struggle", on the contrary, sound equally strong for all the songs and all instruments, as well as vocals, harmony with each other. Disadvantages are hard to find, and if they are, they are only known to musicians and engineer and they can`t be disturbed for ordinary listener, .

Much worse is the situation with lyrics. And the ideological component itself is absolutely nothing to do with this fact, because the whole reason of it lies in lyrical constructions. Due to poverty content and of some primitivism, the lyrics are completely dehumanizes all musical diversity of the album. Most often it is not histories or philosophy, but thoughts which was not finished up to end or rough nationalist emotions expressed in phrases like "For the Russland", "Remember, Russich", "Russian, Forward" and so on, which are almost the central semantic phrases of each composition. Exceptions, in which emotional coloring combined with the depth of the narrative are such compositions as "Аркона 1168", "Боевая" and partly "Былина". "Аркона 1168," says the full story, where such emotional sequence only fuels interest to composition that tells about the events of the fall of the last pagan outpost. To"Боевая", such lyrical primitivism even goes, for acting like "a fist in the face of the enemy", in the manner of some Hardcore bands. At the beginning of the song "Былина", the lyrics are served in the Old Slavonic manner and compel attention, but, unfortunately, at the end of song lyrical passion is runs out. The remaining compositions have little binding between the lyrics and the music, and if you change the texts of some songs, very few people will notice the difference. Previous album had more variety, but balanced on untested pseudo-pagan themes, and processing concepts lyrics provided on "The Time to Struggle" is understandable. But it is unclear why this album was not finalized until the end? However, it is worth noting that most of the negativity regarding a manner of writing and the content of the lyrics, scattered by its performance, because as already mentioned, the vocal part is diverse and corresponds to the level of performance of the instrumental part that allows you to simply enjoy the album, not penetrating and finding fault with its lyrics.

Decoration and illustrations, authored by Pjotr Podkolzin, are combine both archaic and quite tangible handwriting artists painters of the first half of the 20th century (Golikovs I and N, etc.). Pictures of Severe warriors and pagan legends which were made by oil paints. Visually weighty dignity of the album - the urge to revive interest to the Russian school of painters.
Booklet itself was made a very voluminous (12 pages), and the quality of printing is quite expensive. Booklet contains lyrics and illustrations that are combined with each other. It is worth noting that Der Schwarze Tod is very serious about the quality of their products, and this release is not the first and not the last confirmation of this.

During this time, was built many different "Bastion", but all they had left, and were destroyed and were unworthy to continue to exist. This Bastion is still standing, strengthening more and more, from album to album. Bastion is not trying to look like as moss-covered pseudo-pagan hemp or Russian commercial "goy esi", namely creating own material and feeding it to the edge of the sword traditions. And also, in its musical pursuits, the band often uses different sources for creative inspiration, and we should not exclude the possibility of a radical evolution of their music. Here you will not find most of the usual trend of style, because it uses more than one style, and each element has its own originality. Texts do not amaze by author's thoughts and diversity - but we have to admit that they only require disclosure and heavier work and they can`t be accused of lack of sincerity. And so it is very difficult to draw parallels with other similar bands, because they are a bit incorrect. Bastion consists of many modern Pagan Metal elements, mostly from Europe, and also consist of Melodic \ Viking \ Death and Black Metal elements. You can also compare with the Russian scene, for example with the same Аркона, especially in folk instruments, But Bastion more seriously, and its spirit felt much more decisively than Аркона.

"While the Spirit of defenders is strong, Bastion will stand"