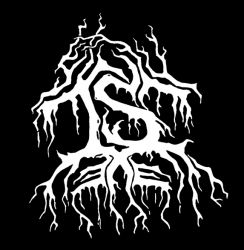 It all started in the summer of 2014, when I had heard enough of early Emperor, Marduk, Satyricon and decided to try to make something own in a similar style. The first tracks reminded Sympho Black in the spirit of early Emperor, but I did not extend it anywhere because of the uncertainty, as from musical point of view and so from the point of view of the final sound, and I gave it up for a couple of months . My desire to continue were inspired by bands like Skogen, Vordven, Evilfeast, Beketh Nexehmu and Burzum. I wrote a couple of tracks, I liked it and just then there emerged a question about the name of the project. Without thinking, I opened Norwegian dictionary and chose a simple word «IS» (nor. Ice) as the project name. Winter was close. Parallels with the value of the runes "I" and the name of the project were never carried out.

Did you have a musical experience before "IS" was started? And do you have other projects \ bands in which you are participated?

Music has always been a part of me. Over the last 8 years I managed to take part in many bands as a bassist and vocalist. I played almost everything - from Blues to Death Metal.

I can`t remember the names of all bands, and I will mention only my main band Still Pluto, in which I have been playing for about 5 years.

«Foreverdark Woods» - release, by which IS declared about itself. It was composed and recorded in a short time, it turned out atmospheric and colorful in terms of content and sound, but it is quite clumsy and lacks a bit of consistence in my opinion. Tell us more about your debut EP. Taking into account everything that I’ve mentioned, is this release a some kind of a attempt at writing, a crossroads, a choosing a road for the project to go, or is this album a harmonious and consistent creation, which has a clear idea behind it?

As you correctly noted, it was a bit clumsy and inconsistent. It turned out this way due to the fact that I had some stuff that I wanted to show people to get feedback and opinions, but I had very little time for release. You can call it attempt at writing, but I was pleasantly surprised by many good reviews and offers from labels concerning cooperation.

Not so long after EP the first full-length album entitled «Songs from the Northernlands» followed. The album gives impression of much harder and more confident one than the EP, with its own sound and atmosphere, also not becoming monotonous during the listening, always bestowing the listener with something new. What idea do you put into this creation? It seems that the album was influenced by Bathory – is it really so? Are you satisfied with it?

The main idea of the album is pre-Christian era of the Vikings with their worldview, culture and history. I was particularly inspired by such works as, for example, "Poetic Edda" and "Prose Edda". Speaking of influence of Bathory - definitely, especially the Quorthon`s so-called Viking trilogy: «Blood, fire, death», «Hammerheart» and «Twilight of the Gods». And I am pleased with the result, even more than the debut release.

After release of  «Songs from the Northernlands», there were new releases from IS (2 singles, and split with Elador). And if the material from singles was made in the "branded" way of IS, although it was a bit different in content, the split presented music, which was closer to the Ambient \ Dungeon Synth. Does this mean that «IS» is not limited in forms of musical expression? Should we expect from the IS more daring experiments with music and sound in the future? How do you think, the presence of a stuff of different genre in your discography will not spoil the main concept of the project, which is nevertheless based on Metal component? Maybe you should create a separate project for the music of a different genres, how do you think?

Since the subject matter of the project remains the same, I do not put too strict frameworks for my music. I think I'm still in search of my own sound, so I'm ready for something new. Although if there is enough material for the album in a completely different genre, I most likely will publish it under another moniker. Perhaps it will be a separate project in Ambient \ Dungeon Synth style.

What is the source of inspiration for you? Are there sources among them that affect you more than others? How strong inspiration does affect what music becomes in the upshot?

The main source of inspiration for me is music and nature. I was lucky: in the place where I live there a many forests and lakes. The beauty of these places cannot be but inspiration, and if you get out into nature with the right music it even doubles the result.

Please, tell us about the concept of IS in detail. At the beginning of your creative activities as IS, there was a feeling that the concept was not fully formed. Is this true? And what about now? What can you tell about lyrical and ideological component of IS? Besides the natural aspects, are there any other subjects in your lyrics, for example near-pagan ones (of Scandinavian or Slavic origin)? Why are lyrics of IS not freely available? Are they too personal to publish them openly?

You're right. At the beginning of my activity the concept was not fully formed. And I think that it does not exist per se, because the idea of my music depends on what inspires me at some point. If the first release was dedicated to nature, the full length album is devoted to the Norse mythology. In any case, I am drawn to the northern subjects - maybe it is somewhat like a concept.

I know many artists whose lyrics are not so easy to find in the free access. Since people are more interested in IS music and atmosphere rather than in lyrics, I do not see much sense to publish lyrics separately from music. Although if it is interesting for someone, I readily will share my lyrics.

There are natural landscapes used as cover art for IS. I suppose that this is Karelian beauty mostly. Are you personally involved in the design of IS covers or is someone else engaged in it? How are the things depicted on covers of your releases important for you? And as for you, is it important to associate the music of particular album with its cover?

Of course, cover is important for me. I think that it adds even more atmosphere and immediately sets up the listener in a specific way. Covers for the first two releases were made by my good friend, and photo for the full-length was done by my acquaintance - a professional photographer. I designed the rest of the releases myself.

What can you say about your personal worldview? How much is it influenced by what you create?

I am attracted to the Northern Scandinavian tradition and it has formed a large part of my world. According to this, it influences my work.

I agree with this statement, because Black Metal is based exactly on the ideological component, whether it Satanism or paganism.

Petrozavodsk has a strong scene. For example: Meti Bhuvah, Soli Diaboli Gloria, СатанаКозёл, Örk Bastards, etc... Who can you notice from a very young and new bands and what do you think of your native scene in general?

Thanks for your answers. Tell us about the plans for the future. What else surprises do you have for the listeners?

I somewhat revised my views on my own music and I will take into account the errors of my previous works to make next release better and more interesting. 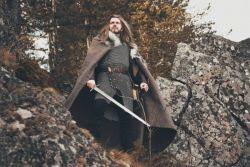 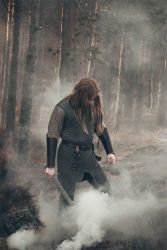