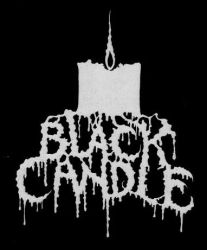 Black Candle was formed in 1994. You have been playing Black Metal for 20 years taking into account the period of silence in 2007-2009. The band has come up a long way and experienced good and bad moments. But still you are brave and natural, and your next album is coming soon. How much did your views changed through the Black Candle activity? Which goals did you establish at the beginning of your creativity and what are you aiming at now? If you had an opportunity to start from the very beginning, in what way would you act?

Rune Simonson: Yes we where going through a lot of Bad Times some Yeas ago. But this only made us stronger and sharper. Our main Aim always was and still is to create Nordic Black metal Art. Our views never really changed. If we could start again we would do the same.

Your earlier releases are different from “Smoke and Monoliths” period both in terms of musical course and general tendencies, but grim and rough mode of playing connects them. Compare earlier and later periods of your activity. The common feature that connects them, is it an inviolate essence of Black Candle? You will never return to what you played in the past, am I right?

Our old Records Nightfire and The Faceless Angel where more in a primitive vein. Very Hellhammer like and Darkthrone. Then we evolved into a more atmospheric direction. Still Black metal but with a strange touch. Our musical Influences are very wide open. As for Smoke and Monoliths we made a lot of Experiments. Stuff that I had in Mind for a long Time. It was very experimential. There are a lot of Pust punk and Doom Influences. For me personally Smoke and Monoliths is the Darkest Record we ever made. It is very different from our older Records but there is still a connection. I think that our new upcoming record is a step back to our old style in some way. 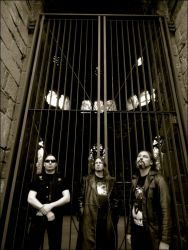 Let’s move on to “Smoke and Monoliths”. The album was issued in 2013 with new logo, and was recorded, mixed and produced mostly by Rune Simonson. The sounding is prominently wild and crude, due to the “agility” of drums, and many creative ideas found their realization by means of a seemingly narrow genre. How do you assess “Smoke and Monoliths”? What are your relations with professional editions and fans? Do you take their critics seriously?

For us Smoke and Monoliths is our personal „Into the Pandemonium“ we wanted to experiment with different dark music styles. I was working a very long Time on these Songs. It was not easy to record them. I spend Hours and Hours working in my Studio. I am very proud of it. It is the record that I always wanted to do. But now it Time for something new. We will not go back to Smoke and Monoliths again. A lot of Fans liked it, some other missed the aggressive Parts. Some says that it is our best Record others prefers our older records. All in all the Feedback was very Positive. I take our Fans critics very serious.

Lyrics changes with music. Some time ago lyrics of Black Candle were devoted mostly to Nordic black mass of 90-s. Now they still have individuality, marked by occultism and abstract philosophy of Death, which you definitely prefer more. Tell about the lyrics of Black Candle. Which transformations did they come through during the band’s activity?

Wanterfrasch: I can just talk about my own lyrics for the upcoming new album called "Lost light of the north".

When I joined the band, were all the songs already finished, just the lyrics were missing. Rune Simonson suggested two titles which they used for the songs while rehearsing (Portal in the Woods and You are… Nothingness). Hearing these two titles, I had some ideas for the themes for my lyrics quite fast. Indeed, it’s an album which revolves about the central themes of death, occultism and hate. These themes bring out the strongest feelings you can feel like loneliness, grief, loss and so on.

We are always surrounded by infirmity and death. The song "Wiesen vun der Nuecht – Wann déi wäiss Engele falen" for example is dedicated to the former Black Candle singer Styxx. He died in 2009 but he never died in our minds. In the lyrics is he mentioned in a poetical form as one of the "black angels" which will never die.

The song „Leschten Akt - Vereenegt Geint Jünger Vun Der Dräfaltegheet An Hire Patreiner Vun De Schwäin" is a clear message to all Christians and their patron saint of the pigs to fuck off!

"Portal In The Woods" is about a parallel existence the hunter (humans) became the hunted. The human race is very weak and self-destructive and will become extinct some day.

The lyrics to "Dommedag - Deres Siste Natt" are written in Norwegian and the title means "Last judgement – Your last night" I wrote it in Norwegian because it should be a homage to the early Norwegian Black metal Bands like Darkthrone, Emperor, Gorgoroth, Satyricon, Burzum, Enslaved and many other great bands. Thanks for the great stuff you have released until the mid 90’s. 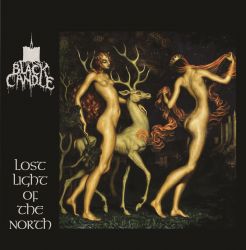 Your new album “Lost Light of the North” is coming in late autumn in 2016. After hearing a promo there is no doubt that it is going to be much alike “Smoke and Monoliths”, with faint notes of something Nordic and nostalgia. Could you share with us – what will the album be like, what shall we expect from the new work of Black Candle? Will you do mixing and mastering, or the sound will stay the same as on promo?

Rune Simonson: The Music is very fast again and hypnotic. Most of Songs have a long playtime. There are a lot of aggressive Moments. We wanted to go back to more traditional Black Metal. It has a very nordic touch and is very basic. Its perfect the way it is. We are very proud of it. We are a 3 man band again with our new Vocalist and Necroshadow back in the Line up. It is exactly what we wanted to do. For us it is a back to the Roots in some Way.

Black Candle came from Luxemburg but moved to Germany. What was the reason for the move? As I know, leaving for other country in Europe doesn’t influence mode of living, as it happens in Russia…

Two of us moved way because of Luxemburgs expensiveness. The Prices exploded in the last Years. Luxembourg has become a shitty bourgeoise wanna be rich society. I always preferred Germany. I have german Roots in my Family. Its imposible to buy a House in Luxembourg.

What is the ideological component of Black Candle? Do you have the common outlook of moral and spiritual concepts or everything is more difficult? How much your outlook is close to widespread currents of the Satanism, Paganism and Atheism? Or maybe our outlook is more unique and deep? What do you think about such concepts as "Misanthropy", "Nihilism"? How much something from this is close to Black Candle ideology?

As for my self I am Pagan. Im into germanic and Celtic Culture. Thats my Heritage. My Origin. We want to glorify the Time before the Romans invade Northern Europe. Our Celtic Germanic Roots. I don’t believe in Satanism. Its something christian and arabic. It has nothing to do with our culture. Christianity ruined Europe. The Christianisation was a total Catastrophe for Europe.

Our Music is our expression for our hatred against this stupid silly world. Our protest against Fundamental Fanatic Christianity. And it is a Ticket to a Trip into a dark Obscure World.

Is the visual side of your creativity important for you? Should the artwork reflect the musical content of the album?

The Visual side is very important. The Cover artwork an Booklet should reflect the music. The Atmosphere and Feeling of the music.

“Smoke and Monoliths” was released at Belorussian label “Possession production”, where “Lost Light of the North” is planning to be released. I think it speaks for a serious approach in choosing companions for making your releases, but it gives reason for your fans to raise a question: why you chose Belorussian label and not one from Europe or USA. How do you like working with Possession production? Are you satisfied with their work in terms of promotion?

We are very satisfied with Possession Prod. They made a great Job and we are honored to release our music our their Label. We had more offers but we chose Possession again for our new upcoming record. They are a fantastic Label with great artists.

As we know, Black Candle isn`t playing at the concerts at present, but you had such an experience in past. Tell us about it. Have you had any festivals or performances, memories of which have remained to this day? Are you really don`t like to play live, or issue mostly touching solely crossings, loads and problems with the line-up, but you still like play live? 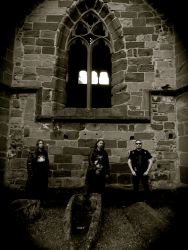 The problem was the many line up changes. It happend all the Time. We had so manny people playing in Black Candle. And thats why we want to stay as a trio now. I play bass, guitar and synth . Necroshadow the drums and Wanterfrascht all the Vocals. Its perfect this way. Once we played a lot of Gigs in Luxembourg and Germany. There where some good gigs but we decided to stop live activities. If we ever played again someday than it would be something very special, not only a simple live performance. But in the Moment we don’t feel the need to perform live.

Yes we stopped all live activities 10 years ago. That has many reasons. First reason is that we completely lost our interest for live gigs. And we have no Bassist. And there was Illness and some of us passed away some years ago. Many negative stuff. Black Candle is now a Studio Band. We wanna focus all energy on doing good Albums. Our best and memorable live Moment was in 2006 in Holland. that was the Best gig we ever played and the best Audience.

The founders of Norwegian Black Metal were Mayhem, Burzum, Darkthrone and so on; Polish – Behemoth and Graveland; French – Black Legions… But since there is no agreed opinion about the German scene, who do you think were the founders?

You mean for Germany. Yes there are some great Records from Germany. Like the first Ungod album, old Bethlehem for example. Or the first Desaster album and demos.

Did you hear Metal from CIS\East Europe – Russia, Ukraine, Belarus? Can you name the most worthy bands in your opinion? Would you like to visit Russia with a show, or for other purposes?

I have Plans to visit Russia some Day. I am very impressed of Russian History and Culture. It is a beautiful Country. It would be great to play a very special live show in Russia. That could really be a motivation to do a great live gig again.

Door into emptiness impressed me very much. A Band that I really appreciate. Drudkh from Ukraine are great too. There many other good bands for sure.

Rune: We will create new Songs. And we have a complete unreleased Album from 2003. We never released it. Until now. We have Plans for a 20 Years Black Candle Compilation with rare und unreleased Tracks. It has do be something very special. Maybe on Vinyl. And I have Plans for a Neofolk Project. We will see.

We thank you for your nice interview and interesting Questions.

May Odin protect you!!!