Sarmat: The reason for creating ChernoMor was because I have ideas, which I can not embody in Mayhemic Wrath. I created first riffs and texts 3 years ago, then I tried myself in Ambient and started reach something. As a result, I created enough material for demo, which I released in digital format in autumn 2013. Further, I decided to make a full-length album in a same way. The main idea of the project is my desire to convey the spirit of '90s black metal, but in the context of the native eastern Slavic tradition.

Tell about meaning of  band tittle? «ChernoMor» - is it a some kind of allusion of Svartedauden («Blackdeath» plague) or is it a reference to completely another things?

Yes, it is exactly «BlackDeath». But I took this name from Slavic folklore.

Quite recently debut full-length work of ChernoMor titled "Trizna" was released. Tell about the thematic and ideological part of the work. Does "Trizna" reflect some definite worldview or is it more contemplation and search for own ways and views? Is there a particular idea (ideas) that you put in the album, and would like to convey to the listener?

My work does not consist any certain idea. But I paid attention to the pagan worldview, specifically East Slavic traditions and death as a new birth and the transition to a better state.

"Trizna" is quite interesting musically due musical combinations which are not so popular today. On the one hand, it's very raw and atmospheric Black Metal, and on the other - a simple but mesmerizing Ambient with natural pagan influences. This combination of styles – was it the original idea or was it born in the process of writing material? Do you divide a music you to styles and pieces? Are you satisfied with the final result of your work?

Originally there was no certain idea, and the concept was born in the process of writing of material. This album was as a revelation, its creation took place naturally, without much effort on my part. It is clear that this process and its results are not "a gift from above." While writing the album, I sublimated many years of experience the inner work on myself.

I divide music which I create only into styles, because I have a different approach to writing black metal and ambient music.

I am pleased with the final result, but not completely.

"Trizna" was released in digital format through Bandcamp. What do you think, is there any sense in such services as in ability, so to speak, to support the musician and pay him for his hard work? Or is main purpose - distribution and propaganda? Do you have any plans to release the work in a physical format?

Indeed, the main goal is distribution and propaganda, money does not have significance for me. Besides this, I, like many others people, whirl in the biblical banking financial system. Of course, there is a sense in such services, fans can help the musician through such financial services. For example, in poor countries such as Ukraine, not all really talented musicians have a chance to buy high-quality equipment, tools for their records or to rent a base for a live performance. Often it turns out that the ones who "set the rhythm" are those who have money or financial patrons who are lobbying their own interests into the masses through music.

I have plans to release it in a physical format. I am searching for label now.

"Trizna" and demo «Thinking and Mindful» have enough serious differences in the sound. Why did you decide to develop a sound in vein of "Trizna"? Are you follower of the quality or the primitiveness and rawness?

I am a follower of atmospheric and immersive music, which can be raw and high quality as well. Speaking about the differences in the sound of the demo and full-length album - it is turned out absolutely spontaneously. I did not choose and did not remember the specific settings, and used that recording equipment which I had then.

It is known that the real Black Metal can't exist without ideological component. What is your opinion about this matter? Do you agree with this statement? What is the ideology to you?

I totally agree! Despite the fact that nowadays Black Metal rolled down to ambivalent subgenres such as «NS black metal», I still think that Black Metal is primarily individualism and a protest, the pursuit of "unhuman," which has nothing common with herd ideologies and movements, be they of political or even more religious matter. So I think that Black Metal is directly linked with the devil, northern nature and to some extent with paganism, but never with pseudo abrahamic ideologies, something like "our skin lighter or our skull have a "correct" form and so we are chosen ones". Belonging to particular nation or race never did anyone a superhuman yet. Only the hardest trials, experiences and work on yourself can make an amorphous, spineless, bipedal, clay substance real identity, so to speak, "Superhuman"!

Personally for me, the music that I create, and especially Black Metal, is directly related to spiritual search. The search of wisdom and personal development - this is my primal ideology!

I suggest that you would like to tell about ChernoMor in the context of Mayhemic Wrath, and not vice versa. But if it just happened that way, tell about your older creation. Do both projects have the same priority or ChernoMor is more urgent now? Do you have plans for any other projects?

ChernoMor has absolutely nothing to do with Mayhemic Wrath . ChernoMor is a project focused on paganism, Eastern Slavic tradition and nature. Mayhemic Wrath is more inclined to the occult and the Devil. ChernoMor is my solo project, which developed in parallel with MW, and on which I worked almost single-handedly. For me, both projects have the same priority, despite the fact that the rest of the line-up left Mayhemic Wrath. There are plans to finish the work on the full-length of Mayhemic Wrath and develop the concept ChernoMor further. Also I’ve the plans to create a new space-themed project in the genre of Electro, but so far it's all just plans.

What do you think about the local Ukrainian scene, especially from Kiev? Who would you distinguish? Can you call comrades anyone among these bands?

To be honest, I don’t think about it too much. I don’t think that Ukrainian scene is interesting for me so much, as well as Kiev scene. Of course except single performers. Personally for myself I can distinguish Gromm, Nocturnal Amentia, Lutomysl and Virvel Av Morkerhatet. Unfortunately, I have no allies among the representatives of Ukrainian and Kiev scenes , except some individuals. At least, they were not found among those bands that I've come across. In general, I do not pay much attention to what people from what countries are certain groups, performers. I do not recognize artificial borders and states. I appreciate those performers who are at first close to me spiritually, and among them there are representatives from all around the globe, regardless of race or nationality.

As I said before, there are plans to finish the work on the full-length of Mayhemic Wrath, further development of ChernoMor and maybe to create a new space-themed project in the genre of Electro.

So, I want to thank HellVinter Zine for the opportunity to be interviewed. Also, I want to thank all those who helped me with the drums recording: Nerguth from the same project for drum recordings of demo, Desecrator Terroraizer from Atmospheric Black/Death Metal band Devildom for recording drums of "Trizna". Thanks to artist Noir Soufre for the logo, and also to my wife Anna for assistance in cover design. 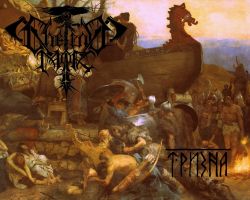 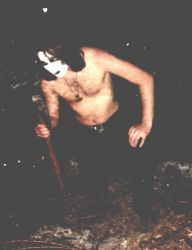