Sytris exists since 2007 and already has its own sound and recognizable riffs and melodies. But was it so from the beginning? When the band came into being, did you already know how it would sound and what it would be musically and ideologically? How do you evaluate the traversed path? Are you satisfied with Sytris achievements?

H.: I started Sytris when I was 17 years old. When you start doing something, I think, you always have some vision how the result should look like. Of course through the years you gain more knowledge and experience that allow you doing your work better, but somewhere in mind you always have the core of your vision. At the beginning (and now as well) my vision is result of fascination of classics of Black Metal – Burzum and Darkthrone, both musically and ideologically. I can say I am satisfied with previous materials of Sytris but definitely it is not last word.

If I'm not mistaken, this is your first project in collaboration with Oblivion. Now there are Void Dweller and Xaosis, and perhaps this is not the limit. Tell us about the feelings and experiences of working together. You have a clear division of labor (music\lyrics) or each member brings his own ideas in every aspect of creativity? Do you see someone who could replace (theoretically) Oblivion?

Yes, our collaboration started with Lost in Eternal Shadows demo. … Apportionment is quite simple and clear: I am responsible for all music, lyrics and concept. X.O. does vocals and bass (and additional samples/effects). Each of us knows what to do and there is no need for any special instructions etc. We have the same attitude and point of view on music, ideology so this scheme works perfect for me. I know many good vocalists devoted to their work, but there is no even theoretically possibility to replace X.O. in Sytris. If one of us left it equals Sytris;s dead.

Demo «Lost in Eternal Shadows», released in 2009, looked like a technical demonstration of your opportunities of that time and did not look like something conceptual. Nevertheless, the public accepted this work worthy and was looking forward to continue. What can you say about this demo today? Is this a past that you love to remember or is this a past which it is better not to remember?

Good point. In fact, if I have my current knowledge about recording and other mostly technical aspects the demo will sound much better. In 2007 I was already satisfied with possibility to record something you can treat more serious than reh or some sketches of song. Lost… were well received by the public and I get a lot of emails about this material. Neither love nor forget, so we decided to put these tracks (with different mastering) on Koszmar EP.

The debut full-length album «Confessions of the Fall» was released in 2012. The work was very different from the demo material, and some listeners were even disappointed. And, nevertheless, it is a very strong work with its concept and structure. Tell us about the debut album and its musical and ideological components. What is the cause of such differences between music on demo and on album? Do you like this creation now?

Disappointed? Why? Obviously it has better quality and it is I guess the only difference between demo and other works of Sytris. When it comes to music it is continuation of things we have done on Lost… and Koszmar, some track;s structure comes from times of Lost…. Lyrics are about slow corruption of man torned by its inner madness wrath and hate against all dwelled in man.

«Koszmar» EP deserves special mentioning because, in my opinion, it is the best stuff of yours. It is consistent work, it tells one complete story, and with every minute the atmosphere becomes tighter and affects various human emotions. How did you come to idea to create such conceptual work? Is this a one-time experiment or do you plan something similar in the future?

Koszmar was written and recorded during two nights of summer 2011 in a very specific time for me. Lot of sleepless nights, walks through forest and literature. One night, one track. It was also first time I used polish lyrics. At time I was not satisfied with final result of mix and mastering so I decided to delay the release and finally we have rerecorded these tracks in the same shape in 2013.

We finally got to «Stronghold of Wrath» - your second full-length album. I still don’t dig it completely, but it is clear that the new creation is at least not worse than the previous one. Tell me more about the new album. What is its main difference from previous releases? Does «Stronghold of Wrath» continue the line of previous work conceptually or is this a new story? How do you estimate the views of the public about the new album and do you actually care about the opinions of others at all?

Main difference? Further progress with sound, I guess. Plus maybe more melodies and variety of vocals (especially in title song). I can say I am really satisfied with final sound of Stronghold. It is still the same concept core, but as Confessions was more focused on the man, last album has wider spectrum. Wrath has been unleashed and will flow the world. Response from public after Stronghold was varied, but generally reviews were quite good. Do I care? I do my work and it is independent from reviews or public, mostly anonymous for me. I can consider suggestions from my trusted people but always the last word belongs to me.

What can you tell us about the sources of your inspiration? What is inspiration for you? Does inspiration influence on technical part of the creation of the album?

Source of inspiration – state of mind, mainly. Completed by literature (for example Marek Hłasko) etc.  Technically… If you mean simplicity Norwegian;s classics you are right, it has influence.

How much is the visual part of the album important for you? Is it a matter of principle for you to have album cover created specially by the artist or do you admit the possibility to use the photos, pictures and so on? Do you put some additional meaning into artwork of an album?

Of course it is very important. This make one complete piece along with music and lyrics. I try to find arts as close as possible to main intention of release. Sometimes it is photo, sometimes scan from book etc. It depends on my vision. But keep in mind that sometimes no illustration is the best illustration.

Black metal without any concept, attitude and ideology is just music, not Black Metal. Ideological component is not always given directly.  Often it is even better if it is hidden and will be understand by those who has to understand (or will be able to understand).

Tell about your attitude towards such concepts as Satanism, Paganism, Atheism. Do you consider yourself to be religious people? Tell us about your world view.

I guess no one cares about my world view. Satanism, Paganism are divided and some fractions get lost their true self and becomes some like media puppets. Their ;fanaticism; have nothing common with true ideology and just make them hilarious. Fuck them, only real devotees matters. They don’t need any explanations.

Tell us about your other projects with Oblivion - Void Dweller and Xaosis. What are their musical and ideological differences from Sytris? Also tell us about your project Pręgierz. Do you have enough time to work on each project equally?

To make it clear – my main bands and priority are Sytris and Pręgierz. Working with Void Dweller, Xaosis, Demonic Slaughter is more like session/guest appearance.  Nevertheless new Xaosis will be mostly based on my tracks recorded between 2006-2012. Me and X.O. have the same attitude about music and other stuff so the core of ideology is always more or less the same, differences are just on technical issues and language.

Pręgierz is a result of cooperation between my good friend and me. We decided to record some black/death metal in old vein in our own way after years of discussions about music and drinked alcohol. Very soon in 2015 first EP Blood Sanctions will be available through Blood Harvest. And so on, we are gathering ideas for next release.

I am rather into Black Metal from Poland, Norway. From countries you have mentioned I have in mind Pseudogod, Khashm, Abwehr.

We have done tracks for new EP/split. Nothing more to say at this moment.

Thank you for the interview. Any final words? 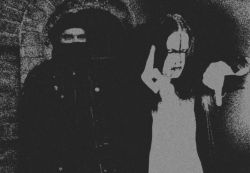 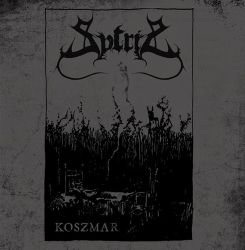 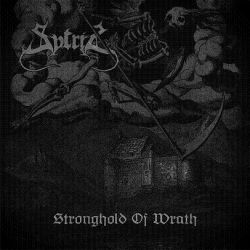