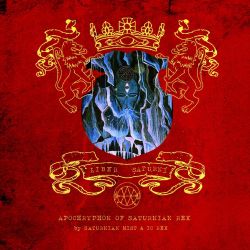 Two Finnish occult black metal juggernauts, Saturnian Mist and IC Rex, have joined forces for a collaboration split in the form of esoteric and aural research of the archetype of Saturn (Satan). An idea for this split derives from the time before IC Rex officially called it quits in 2011 (you can read an official statement from IC Rex about the matter in the end of this post). The split contains four songs from both acts where fierce black metal chaotes Saturnian Mist  meets ethereal and majestic IC Rex in a perfect example of the diversity of Finnish black metal.

IC Rex not only develops the line of ritual magic studies which were put to the core of the band’s existence since the first demo and which resulted in three magnificent full-length albums, but basically concludes them, stepping to the next level where Artifex IC left it at the Vedenjakaja (Aquarius) album, proving IC Rex to be - yet again - much more than ”only music.”

Saturnian Mist offers their unique blend of black metal chaos magick they have developed during the years that is culminating in their latest Chaos Magick album from last spring, but now presented along with the strong sense of their roots found from the soundscapes of melodic Finnish black metal sound.

A statement from IC Rex regarding the release: "Although officially declared dead and buried, we decided to do this split release together with Saturnian Mist, mainly because it was planned and agreed upon before we decided to call it a day. This is absolutely the final release we are going to make with IC Rex, and we have no plans to make any more releases with this entity. This is also our final statement regarding the issue of the left hand path, and as one can read from lyrics, our view of the entities Lucifer and Satan is highly spiritual and transcendental as it has always been. IC Rex is dead - long live the King!”