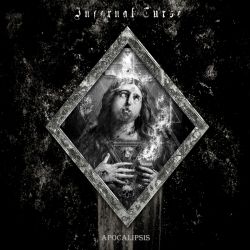 At long last, Infernal Curse reveal their highly anticipated second album, Apocalipsis, set for international release on February 26th via Iron Bonehead Productions. Hailing from the oft-overlooked scene of Argentina, Infernal Curse are a study in patience and defiance. Forming in 2008, early on, the band's sound was strictly within the blown-out blackthrash characteristic of South America's most-underground metal, culminating in the clattering 'n' chaotic Awakening of the Damned debut LP in 2012. However, it was with the Iron Bonehead-released mini-album The End Upon Us in 2014 where Infernal Curse truly found their stride. Reigning in the chaos for a more pulsing form of barbarity, the power-trio were as violent and virulent as ever, but pushed the still-overwhelming physicality into the beyond.

Now, with Apocalipsis, Infernal Curse have pushed beyond The Beyond. Soul-devouring yet ceremonial, hideous yet hypnotic, molten in its sheer crushing weight but effortlessly cruising along a wavelength too frightening to perceive, this is bestial metal taken to its psychedelic extremes. Explosions of subharmonic riff, drums driven with animalistic abandon, sepulchral voices plumbing the depths of the abyss, and mind-melted leads divebombing into and out of the metaphysical carnage: all the rudiments are essentially the same, but the destination in which all these diseased, doom-draped decibels are heading toward resides on a far more spiritual plane. One could qualify it as "ritualistic," and one would be right; one could also argue that there are layers beneath these layers, and that one would also be right. It's this paradox between profundity and crudity which elevates Apocalipsis above the mongrel hordes mindlessly battering away to the same well-worn, black/white/red-all-over Blasphemy tropes and suggests an indeed more elevated approach to the bestial arts. 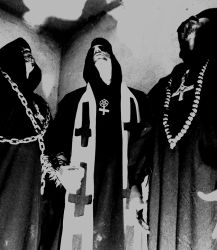