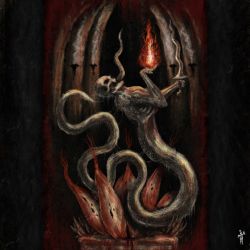 Iron Bonehead Productions is proud to present the debut demo of Malaysia's Voidnaga, Demo MMXVI, set for international release on March 11th. Voidnaga came into existence in 2015 as a solo-project of Adlan after the demise of Impious Blood, his former project. His interest was shifted into reaching his ancestral magic and occultism by utilizing the classic black/death/doom frequencies. Fascinated with cosmic horror and the mythological/demonological deities of his homeland, Adlan composed and recorded Voidnaga's first music while he was in isolation from the material world. Thus was birthed the band's first demo, whose coruscating and all-consuming sound invokes the sulfurous haze borne by the darkness of Malay Magick, which is studiously reflected in his lyrics. Fathomlessly dark and dread-inducing, despite its monstrous enormity, Voidnaga is a conduit for otherworldly energies - or, as Adlan puts it, “Meditated Serpent Transforms into a Great Nagas.”

Трэк-лист:
1. Intro (The Coronation)
2. Emanated Light Towards Chaos
3. Haze Bore Darkness
4. Those Who Dwell in the Halo of the Sun