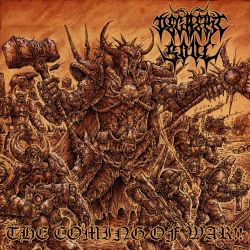 
Today, Iron Bonehead Productions sets March 18th as the international release for Decrepit Soul's second album, The Command of War!!, on both LP and CD formats. Hailing from the barbaric metal hotbed of Australia, Decrepit Soul have been patiently perfecting their craft the last seven years over the course of three demos, a split, and a subsequent debut album last year, Uncreated and Eternal. But compared to their more traditionalist black metal beginnings, the duo blast forth with an utterly unhinged fury on The Command of War!! Not for nothing does drummer Marcus Hellcunt (Vomitor, ex-Bestial Warlust and Gospel of the Horns) now play in Decrepit Soul: the band's sawn-off sound throbs with a crushing gnarliness that can only come from the most hellish climes Down Under. That sound is also rendered in absolutely punishing form by a robust 'n' well-rounded recording that allows both clarity and vulgarity, shining steel and bloodied earth. The Command of War!! is a record that doesn't reinvent the wheel so much as bulldoze through it, tearing asunder any last remnants of "progression" or "good taste." Decrepit Soul are crude 'n' rude warriors, bestial and unbowed, prepared to grind the bastards down - hail The Command of War!!