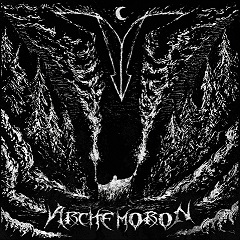 When I see "Stygian Hellenic Black Metal with Nightmarish Atmospheres, Agonizing riffs and hateful spells from Kingdom of Hades", written on the box in black letters on a write background, I imagine a gloomy cover, powerful riffs, and very desired atmosphere. When you wish for at least what's expected, or more - you snap off a cliff, yell into a waterfall, and hark into the сosmos with the all the might of thought, to hear the dear words, which will disclose to you the power of secrecy. But the truth is, usually the words do not reflect the true core, and when you see a colorful headline, instead of the band behind it, you see merely what it may wish to be or become, or what it may wish for you to consider it as. It may or may not be a joke, but there aren't that many successors of Bathory, Immortal and Inquisition; however, copycats second-sort make up about half the planet. The question is, who will be next to take on the gloomy leader's throne and create a new, immense and agonizing era... - a worthy one, or "as always".

One of such bands is a greek project Archemoron. Although it exists since 2008, the roots lie in the ancient '99, as called Ancestor. In '08, the members found themselves unsatisfied, so they decided to change their style and its groundwork. Everything changed as a result (even the name - Archemoron), and the members began to prepare for a new, never-ending war, which in 2001 brought into the world a new firstling called " Spiritual Transcendence". I found that this debut album did not meet hopes and expectations, which were so stubbornly put into it, pouring slash fire of reviews (if there even were any), and silence of the crowds, all over the band. But Archemoron were not about to back down, and decided to return to their akin hideout, to toss around the tin coals of the debut and make a better album. So in 2015 a new album was released, which received a name "Sulphur and Fire". Line-up consists of the band's leader - guitarist/bassist Melikertiis, vocalist Aristomenes, and another guitarist - Typhonas. Drummer Leogenis played the drum parts, but unbaptized (with an inverted cross) of all other work, so he got a sessional status.

The album opens up with a piece called "Across the Seven seas of my Soul", which is occurring in a sea, without a doubt. The sound is secretive, vivid and a little doubling, as if hundreds of virgins were being drowned in distant waters. Firstly, there is a lingering intro of a solo, and then the music smoothly retreats into the sea, where it finishes the final riff with an ample differentiation of sound, either on turned off guitars, or not. "I, The Black Desert" stats with the primary - the introduction, and stays in it 'till the end. Somewhere in the second half of this track, the band had to turn around and somehow curtly finish it. It is desired to note the precise definition of guitars, and their stubbornness in their own battles. Actually, considering them on a serious note, the sound is literally washing away a desert, which is really hard to describe, being in Greece. On the brighter side, in "Ancient Callings" the drums persistently chip, knock and put the listener in a good mood, thanks to the sessional member Leogenis. I don't understand, how can it be that a drummer, who plays throughout the whole album, while percussions are the core - main and most adequate element of all instruments, is considered to be just a sessional member? At the finale of the composition, adding on to the earlier solo, are such obscenities with the instrument, that I just can't skip over them. All things from this album contain solo parts, but I can call normal only 4-5, because all others are put in such a "peculiar way", that I just can't find any esteem toward them. "Aristomenes" is certainly a strong piece, since it was named in honor of its chosen vocalist. How is he doing there, I wonder? The vocals on the album are overall alright to the ear, but is too poor with the quality of sound, and amply crosses the border of slight deafness, resulting in his midnight screams being especially dry and coarse, and in separate tracks it plentifully lags in quality. "Sailing to The Black Sea" - the second conversation about the sea, which turns out to be pretty smooth up to the middle, and becomes somewhat interesting only towards the end, with the assistance of percussions and guitar gashes; unfortunately, this conclusion only lasts approximately one and a half minutes. "Lemourian Silence" is an instrumental track, which portrays a howl out of a rocky cave, and towards the finale it paints all over itself with a radioactive paint, severely picking up the hue. "Preachers of Heaven, Maggots of Earth" begins with kind of swift notes, but towards the middle slows to an "instrumental rain" - there is a lot of blows in different directions, and none of them seem to hit the target. From the initial parts, a decent rhythm is evident, however the rest lowers the whole track into absolute scum. "Omnia Movets" is probably one of the most prosperous pieces from the album. Its average tempo of Black\Death Metal sets the song in the right tone, which shows off this track in a proper light. The same thing can be said about "Blitz", even though certain moments stagger, plus guitars drift off into some incorrect direction. "Lacerate the Mind" is the final piece of the album. There are lots of congruent and wildly, catchy riffs, as well as total discordance, when one riff is good and well-wrought, and another is its reciprocal. Actually, in the end, open eyes looked album, with its melody, its desire to play a couple solos with might of percussions. And, in spite of some incorrect feints, the second part still blows you away and forces to hear this track 'till the end. A good band should fabricate this way in every decent track, magnifying its grandeur.

The main problem of this album is that it is even. There aren't any moments in any tracks, any cool points or mass adrenaline - here, everything is even, like driving a harvester through a field. Tracks start and continue in the same theme, without even noticing, what goes where, and such approach works down the whole album. And there are as many as 10 pieces in it, while correct sounds were achieved in just 2-3 songs, and all the rest humbly leaves listener's memory as soon as it ends. Instruments, from guitars and bass to drums sound fine by themselves, but are completely unsuitable as album material. Looking grim from a first look, but rollicking and severely incomplete in the sense of any logical finale, in its core, the material is so maladroit and aimless, that it restraints listeners from fully felling and getting to know the music. Some tracks may even be repelling from listening through them. The next point for worries is the solo parts. In some tracks they are pretty decent, but in some are completely out of control, and in the rest they are simply unnecessary. Here, the guitarist's attempt of self-actualization is most evident, especially when he tries to fit a solo pretty much everywhere, no matter what. Since he had only 2-3 parts of these complete - for 2-3 tracks - and everywhere else he tried to push through a misty improvisation, which in some places sounds like outspoken slime, which really treads down on one's ears. The vocals are overall plain. Throughout the whole album he quietly and characterlessly, from time to time he sung his parts, and even with worthy accompaniments, his weakness was evident. I won't even comment on his integration. The quality of "Sulphur and Fire" remains controversial. The sound of the whole album gives a good picture of average machinery, but on high volumes on a good machine, the sound falls apart, there is cracking, noise and even some crashing. With any sounding, solos will always be strong and vocals - weak.

Booklet of the аlbum is pretty big, so lyrics are included. In this sense, Melikertiis and Aristomenes both contributed - they lead the lyrical components of the album. Lyrics of separate pieces is decent enough, and the in rest it seems to consist of independent words. Compositions are inclined not to consider manifestations of ancient powers or descriptions of   a sought-for places, but to describe an intrigue inside of a detached world, with a dilated resolution and the eventual finale. If the first three pieces jump into dirt, not knocking anyone off their feet, "Aristometes" (named after the author), "Sailing of The Black Sea" and the final "Lacerate the Mind" manage to broadcast something interesting, while "Preachers of Heaven, Maggots of Earth", partly "Omnia Movement" and "Blitz" are the best masterpieces of the album in the sense of lyrical content. I wouldn't say that they are anyhow hard to comprehend, but in contrast with Melikertiis, which literally crawls into a deep and not very evident obscurity, Aristometes tells its story accessibly and simply, and does it so dumbly, that simply doesn't keep up with the theme, actively littering distress and curses. Aside from lyrics, the booklet contains quite a strange cover, where instead of a blacked out forest and... a tail doesn't contain anything. From one point of view - this is Black Metal, from another - this is kinda empty. Then there is a text on the other side, it consists of the main line-up, all invited sessional musicians, and also whoever croaked anything about them. The disk itself is decorated with the logo (helmet in maroon), and on the background there is a dour picture of a gloomy demon, whose brother is also in the booklet. The pages of the booklet themselves, apart from lyrics contain a cover portraying both authors together, and Aristometes and Melikertiis separately. The photo has author's words next to it, which clearly don't have anything to do with lyrics, they are a peculiar thought from the author, and an advice about life. But if Aristometes simply sit on the bottom and smiles, Melikertis actively stands in the helmet with a shield, calling himself and his uncovered appearances to fight for something. It's time to finish up with this.

"Sulphur and Fire" is a controversial album. It is better than the band's debut, which itself is a great achievement, but doesn't pull off as an outstanding album - for the reasons listed above. I wouldn't recommend getting it also because of the sticker, which bands proudly stick onto copies of their albums. If a band, instead of working on the technical aspects of their music, begins to deal with advertisement and popularity, I doubt that Archemoron's music will improve much before the next album.