Let's start with the fact that this year Woodtemple turned 16 years old. Honestly, it does not look like this from the outside. Your music is young and cheerful, and the same can be said about you. How do you assess the current state of Woodtemple? The path that has been passed - how is it significant and important to you? How long will Woodtemple exist ?

Aramath: Hailsa! Thanks for the compliment! Yes its true.... Woodtemple exist now 16 years. I have the same feeling now like 16 years ago. The same it is with my music.  I reached more than I ever imagined.

Woodtemple is a part of me and there is not a day i don`t think about it. And I still stand at the beginning, even after 16 years.

Woodtemple will always be a part of me. As long as I life there will be Woodtemple

6 years passed since «Sorrow of the Wind» was released. This is the largest gap in the history of the project between the releases of the albums. What is the reason for this silence? Is it a desire make album as good as it only possible? Or is there some other reason why did you keep silence through these years?

Ok “Sorrow of the wind” has a long process of creating behind it. Started from guitars over the keyboards, which take the most time. This Album has took his tribute. And as it became available it started with interviews and concert requests and so on.  I was overstrained with the situation and needed a break. In former times I just started with the next Album after release of a CD. But with “Sorrow of the wind” I was able to express that much that there where no new ideas. I began writing songs after a year again. I took the break to become a clear head to start over again. Additionally the whole scene nerved me as well. So many bands formed just out of fun, not of conviction. But it gets better now. But the prime reason surely was a musical overstraining. Guess the next album will be finished sooner...

«Forgotten Pride» is the name of the new album. What can you tell about this work? This time you recorded a live drums, if i correct. Tell us about this entertaining experience.

Also „Forgotten Pride“ was bound to much work and stress. It deals with the old times, pride and honor had a big value. The texts are written down from heathen sight. But to understand my sight you just have to look back 50 years. The people just lived more moderate and had more respect for each other.

Today 99% of the people have no honor. They include into a system, have no own opinion and are egoists. Except of internet, computer and facebook they know nothing to do with themselves. I misprize this.

And so the album deals more with the worth of humans.  The cover artwork fits perfect to the album title and the story behind it. 3 Warriors, fallen side by side. Today it would look like, one warrior on the ground and the other two stab him from behind. I want to motivate people to think, to represent their own opinions.

No the drums haven’t been recorded live, but I will at the next Album.

From its sound it’s a very clean album, the acoustic parts come to a good standing. The voice is very aggressive and the whole sound is really good mastered. I’m satisfied with the end result.

What does «Forgotten Pride» tell about? I have no doubt that the main ideological theme remains the same as usual. But tell me, what are the main thematic differences between the new album and previous releases?

“Forgotten Pride” is a concept album, not like my other works. My former works dealt with war and destruction, this one with the appreciation of the former times.

It is worth noting that Woodtemple now officially became a live band. And this, if I'm not mistaken, your second attempt in this field. The first was about 10 years ago and it wasn`t successful. Tell me how things are now. Tell about your predictions, impressions, feelings and thoughts regarding this new aspect of your creativity.

My first concert was in 2003 in Germany (Hohenmölsen) it has been a good organized event. We almost had no time to practice before the gig, but my session musicians made a good job. To be honest the stage is not my world. But sometimes you just have to play live to prove it to yourself. There are always many requests for playing live. And so I decided after 11 years to play a concert. The concert in Paris happened not as expected. We practiced a lot and have been well prepared, but the concert was everything but good.  Days before the concert all of us had to fight with the flue and the last 2 days before the concert there was no thinking about sleep. On stage we had the next problems. The bass was way to loud and 2nd guitar player and I almost couldn’t hear our guitars and so we had to play after feeling.  We now know the mistakes and will make it better next time. It’s a question of honor to come back to Paris and play again. There where so many people there because of Woodtemple. And next time they will get the show they deserve.

New members - were they recruited only for session work? Or you would not mind idea that in the future they will be able to participate in making music and may become a permanent members? Also tell us more about the role of Rob Darken in Woodtemple. He, according to the received information, is also participating in your project since not so long ago.

Fix on the Woodtemple Front are only Sebastian and me. He is now since march of 2014 a true member and will take in future the part of the drummer also in live playing! Thereby Woodtemple will be faster, more technical and brutal. I look forward to work with him and also have some ideas for the new Album already.

Arathron the live guitar player will only take part on concerts. He released his second album some weeks ago. He has a solo projekt in Black Metal style called Ancient Wrath.

Rob Darken is in the same style only session bassist. He always prepare mix and mastering for Woodtemple. He always made a good job and I am very thankful for that. But I think he wants to play some concerts with Graveland in the near future, and so S.M. from Trollskogen will act as a good substitute for him. He is a good friend and musician and also played the bass at my first concert.

Also, together with the «Forgotten Pride», comes reissue of your very first work - «Swords of Hate». How do you think, is this work actual nowadays? Is this work important for present day, or was this re-edition done just for the fans who want to get the entire collection of Woodtemple?

„Swords of hate“ will delay a bit. For me it has a very big significance. The Re-release shall be an offer for all who want to complete their collection, who haven’t got the demo.

The new album - and the new label, Sacrilege Records. Tell me about how did you meet with this label (or vice versa - how they found you). Are you satisfied with the cooperation with this label? And what happened to the Folk Records?

I got to know Cem through a former interview. After my appeal he made me a good offer and so it came to a deal. I got everything from him I wanted. All A5 Digis are sold. And it will prove where LP, CD and MC format will be released. Folk Production was the label of my wife. But we had to close it after a year. We put all the profit in underground bands, but they haven’t sold.

Cover of «Forgotten Pride» was painted  by Kris Verwimp again. What do you like in this artist? Does he perfectly portray your vision of cover art, or do you just like his style? Do you plan to collaborate with him on the long term?

Kris Verwimp is a great artist. Surely I like his style of drawing, and also his way how he includes his ideas into the drawings. His mode of operation is incredible. I describe him how the cover should look like and give him the story the album tells. He also always wants to hear early versions of the songs for his inspiration. And so a perfect image forms. And of course I want to work with him in the future.

Black/Pagan i listen only to older bands from beginning of the 90’s. I can’t get warm with all the newer bands. The market is more than oversaturated. The only new bands that I listen to come from Russia or Ukraine. I like the cold atmosphere of the bands. Through the poor circumstances and worse studio terms they try to get the best out of it. Their conviction can’t be over gone. I have big respect. Aside from it, the Russian singing fascinates me. It sounds brutal and aggressive, the influences from Russian folklore are genuine and not to overtop. If the language wasn’t that hard, I really would like to sing a song Russian. It just doesn’t sound that good in German or English.

Bands I like to hear: Temnozor, Kamaedzitca (Belarus)  Song „Prisoner“ its just genius. КНЯЖАЯ ПУСТЫНЬ (i just found this band in fall 2014 and bought 2 albums. They now are one of my favorites.) and also Nokturnal Mortum (UKR), Honor (PL), but I guess it will get more....

I have big respect from the Slavic underground scene. The people from Europe can cut off a big slice from them.

I slowly will begin working on the new Album. There are already many ideas. Maybe there will be a possibility to play in Russia sometime. This would be great. I hope that the new album will be finished faster than the last one and that there aren’t any delays like they where at the last one.

Thank you for the interesting questions and especially for your patience. I wish you all good with your Zine. 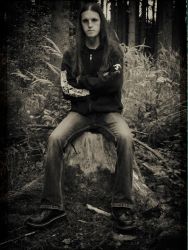 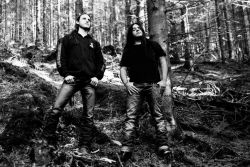 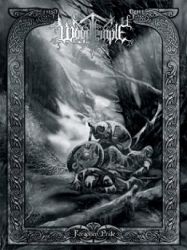