WinterHeim: Greeting, comrades!  As far as possible, tell us more about the early days of Draconis Infernum. What happened during the existence of Nihilistic Hate (predecessor of Draconis Infernum), if it is not a secret, and how you felt the transformation from one band to another? And how your views evolved over last years? Do your wicked hearts still burn with fire as it was in the beginning of your path?

Xepher: Greetings! In Nihilistic Hate, we were a young band doing mostly covers but after a while, this changed when we found our calling and everything just fell into place with a couple of line-up changes. Our beliefs and views still stands the same as when we started ten years ago and Draconis Infernum is a reminder of what we have forged musically, artistically and spiritually over the years and still stands strong today.

The new album «The Sacrilegious Eradication» is your last work at the moment, even though it was released about a year ago. Tell us about your feelings and impressions during the work on this poisoned spawn of underworld. Do you feel it is your most lethal album on today? Tell in details about album recording process. Was everything done the way you wanted? Is there anything that you would like to change now?

It is our best work to date in my opinion. We commenced writing the new songs and rehearsing it a few months after the release of our second album and was relatively a breeze. The production of this album took longer than expected, partially because we don’t like to rush ourselves into it and take our time.

However, it was delayed with the release of this one for more than a year due to the problems we were facing with the original sound engineer whom we previously worked with, whom suddenly had no more time for us due to some personal problems of his, which lead us to move on to another sound engineer whom we also weren’t quite satisfied with, and finally resulted in us once again taking our songs to another studio for mixing and mastering.

In total, we moved studios 3 times in the course of the production of the album, which was absolutely ridiculous and something we have never done before. As I look back now, all this adversities we went through was worth the trouble. I am satisfied with the overall album with no regrets.

«The Sacrilegious Eradication» in terms of material and the sound seems to be a direct continuation of the previous album «Rites of Desecration & Demise». Clearly, this is not a coincidence, but does this mean that you have found the perfect combination of material and sound, the Absolute of Draconis Infernum? It seems to me, that you prefer to sharpen weapons that are already available in your hellish arsenal to the deadly sharpness, rather than forge fundamentally new weapons. Do you think it will always be so?

It is definitely a continuation from our last album Rites of Desecration & Demise. “Sound” in production plays a big part in the music of Draconis Infernum as it can make a world of difference. At the same time, with the right ideology comes the correct sound. In terms of style, I believe we have developed a style and identity of our own and will stick this way for now.

Tell us about the concept of «The Sacrilegious Eradication». Is it important for you to create a complex and intricate concept for your albums, and disclose it to the fans? Are the lyrics of your songs addressed mostly to the void of your souls or aimed on bringing something to the audience? How much is this part of your creative work principle for you?

"The Sacrilegious Eradication" is about us giving our middle finger in the faces of those who still adhere to the boxes of boundaries they framed themselves into. Sacrilege is beyond desecrating what is "holy" in the religious context. Sacrilege involves violation of the norm that is deemed important enough, specifically to those who feel the said violation itself.

I don't think "concept" would be the appropriate term here, but if it helps to make sense out of everything we do then feel free to think as you wish. Complexity and how intricate our content is - that is something that is out of our concern. We are not a technical or progressive band, we’re a Black Metal band. Black Metal in its own right is simple and straight up. There is nothing intricate about it and that’s the beauty of Black Metal.

There is a reason why some say "your body is your temple". It has its own way to communicate with the mind, and when you know how to exercise and channel everything and then it becomes second nature. So basically, simply put, it is the exact opposite of addressing "mostly to the void of your souls". Whether or not the audience feels anything, it all depends on how "prepared" they were. The impact on people who have never heard the materials before, of course, will never be the same as those who come ready - that is to say that they have at least gotten themselves familiar enough with our materials. Even for those who are extremely familiar with us inside out will never get the same message and feel from us. It may be the same tunes and the same words, but the different time and space as well as other variables will alter things for them at the receiving end.

There is no doubt that members of Draconis Infernum are true acolytes of death and total chaos. But what can you say about your personal religious views? Are you adepts of the particular emanation of the Horned One, or Chaos is indivisible and faceless for you, or you belong to the atheistic wing of extreme BM bands which do not recognize existence of any "higher powers"?

It is pretty obvious. We bow down to no one and that is all you need to know.

Draconis Infernum is of those bands who respect their heritage, making cover versions for the mega-classic and legendary bands. Why have you chosen Impiety and Urgehal this time? How these bands and the people who stand (stood) behind them influenced on your personal musical preferences and the music of Draconis Infernum?

As for the idea of the Urgehal cover, we met Hans Fyrste of Svarttjern in Germany on our first trip with the guys from Urgehal at the festival we played in 2009. The guys from Urgehal dedicated ‘Mirror Satan’ a song off their set to us, in which we were very honored and remembered till this day, and so when Trondr passed away in 2012, I decided to return the favor and do a tribute to him by doing the Urgehal cover with Hans Fyrste on vocals, as we have always talked about collaborating on a song and so this was how these covers came about.

You also have a tradition of cooperation with Sickness 666 in terms of design for your releases. This great observer of endless fields of eternal war and carnage is certainly a devilishly talented artist. How do you assess his contribution to the visual concept of Draconis Infernum? Will you cooperate with him in the future? And do you concede that you will work with anybody else, at least in theory (if so, with whom)?

We now have worked with a few artists for artwork and Sickness666 is one of our favorites as he does it best. He has also done artworks for many notable bands and we are honored to have him to do our two past albums artworks. However, we are of course open to cooperating with other artists in future.

There is nothing new that Draconis Infernum performs live rituals, moreover – it has become another wicked established tradition. What do you feel during the performances? Do you remember your first concert? What concert \ festival have you remembered most? Do you think that live performance is more than just playing music alive?

About what we feel during the performances, this is what makes every single rite of passage we deliver a unique one that is never replicable in its entirety. The difference in time and space as well as other influencing variables will directly affect the outcome as well as the output.

Our first public appearance was in 2008, in support of Hydrophobia & Defiled from Japan back in Singapore. We pretty much remember every single rite we have performed thus far. Every single one of them was special and unique in it’s own way. We have by far, shared stages with Marduk, Dark Funeral, Nargaroth, Urgehal, Koldbrann, Lord Belial, Cemetery Urn, Dornenreich, Negator, Sabbat, Metalucifer, Svarttjern, as well as many other great acts and the past decade has been one hell of a journey for us all. We do remember all that we have done and we are very much looking forward to more in this next decade. Every single performance is a different rite of passage on its own, and we're not just talking about doing it live in front of an audience; the same goes even in studio with no one else but us. Every single time we get together and perform our respective duties, when it all come together, under whatever condition it may be, they always have a specific purpose and they always spark off something different.

People just have to come see it for themselves, and then you can tell us if what you saw and heard was "just playing music live".

How do matters stand with Singapore extreme Division now? Is it strong now? Which new young bands would you recommend?

Singapore has a small metal scene that is diversified with a few notable older bands as most would know. I personally have no new young bands of my liking to recommend.

Did you hear Black\Death\Thrash Metal from CIS\East Europe – Russia, Ukraine, Belarus? Which are the most worthy bands in your opinion?

Well, some of the East European bands I enjoy are Noktunal Mortum, Hate Forest and Drudkh.

Well, nothing much confirmed for now that we could speak about.

Thanks for reading, check out our latest album ‘The Sacrilegious Eradication’ through Ketzer Records. Ave Satanas! 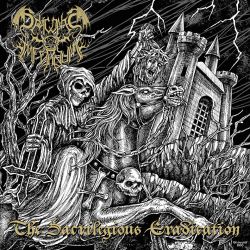 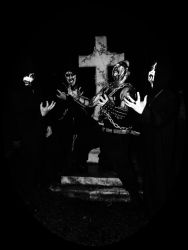 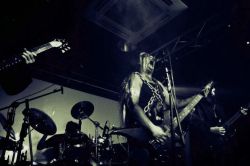